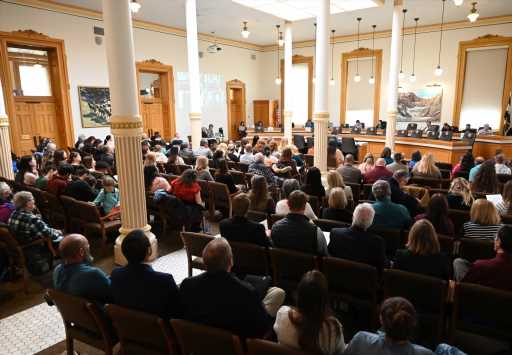 When Colorado lawmakers return to the Capitol in early January, a breath-busting list of issues awaits them.

Democrats won big in November, but even the mandate they wield has conflicting interpretations. As rank-and-file legislators and leaders finalize their bills and weigh the latest economic forecasts, here are some of the pressures that await them in 2023.

Democrats wield historic majorities, but they still want to work with Republicans

State Rep. Mike Lynch, a Wellington Republican and leader of his caucus, and his members — most of whom are freshmen — will be representing their constituents from a “super minority” position in the chamber.

“We’re realistic about the fact that we’ve got to work with the majority if we want to get anything done,” Lynch said. “But that’s not anything new.”

Lynch is optimistic the brutal margins for his party don’t mean a complete sidelining. He called Democratic leadership “gracious” in his early conversations with them. In particular, Democrat leaders appreciate his caucus’ explicitly rural perspective and that some of the biggest challenges facing the state — water, chiefly — run through their districts, he said.

“I believe, at the top, of their leadership. They’re serious about getting serious things done for the state,” Lynch said. “I haven’t seen anything not in good fashion from them so far.”

Lynch does acknowledge that his party’s position doesn’t mean they’ll always get what they want, but he’s hopeful they’ll at least have a voice in the discussions. And as his No. 2, Colorado Springs Rep. Rose Pugliese notes, each of the members also brings their own mandates from their constituents.

The bipartisan, pre-session camaraderie was echoed by Democratic leadership in the Senate. At a recent town hall with constituents, Senate President Steve Fenberg, a Boulder Democrat, acknowledged “huge majorities” for his party in the upcoming session. But, “that doesn’t mean Democrats are just going to run roughshod over everybody and do whatever we want,” he said.

Instead, he called it a “mandate to continue governing in a smart and progressive way like we have been over the last couple of years.”

But Polis will now be working with a nearly veto-proof Democratic majority. Whether the more progressive or moderate flank carries a mandate and how leadership handles its members and the governor will be a key story of this session.

Under threat of veto last session, state Rep. Andrew Boesenecker pulled a rent stabilization provision from a larger package aimed at helping mobile home park residents. While work on affordable housing remains a priority, Boesenecker, of Fort Collins, said he wasn’t able to find common ground with the governor’s office to bring back the provision this upcoming year. But, he characterized it as part of a collaborative process with different backgrounds, philosophies and constituent desires.

Sen. Rachel Zenzinger, an Arvada Democrat who chairs the powerful Joint Budget Committee, said she has already told members of the Senate’s Democrat caucus to brace for a difficult year. Policies, not new programs should be their priority, she said.

“It’ll be incumbent on us to continue that conversation, to keep trying to educate our colleagues on the situation and how the budget works and why we’re in this situation,” she said. “Then hopefully people will be more understanding about — we just are not able to fund everything this year.”

Colorado won’t have the deluge of federal funding that padded the budget in recent years, now that the federal response to the COVID-19 emergency has virtually ended. While lawmakers continue to tout the state’s economic strength, they also note that keeping up with inflation alone will chew up any growth in the funding. Toss in warnings of a recession — and a resulting focus on state reserves — and there’s not much money for big new programs.

Instead, expect lawmakers to cultivate the programs they’ve launched under the recent — and continuing — Democratic trifecta. Those include universal kindergarten and preschool, the Behavioral Health Administration, and the Colorado Option, all of which either recently launched or are in the process of it.

“A lot of those policies that haven’t actually been implemented yet,” Zenzinger said of programs established by recent legislation. “They’ve been enacted, but they haven’t really started yet, right? And so now that we’re getting them off the ground, we are experiencing some bumps.”

The push-and-pull of criminal justice

Expect Democrats to continue to look for the balance they seek with criminal penalties while not over-policing Coloradans. Polis has already asked a state commission to stiffen penalties for car thieves, something that legislators may take up, as well.

Meanwhile, lawmakers are also looking to reignite efforts around regulations for law enforcement. A bill to limit law enforcement’s ability to lie to children fell last session. Rep. Judy Amabile is sponsoring a bill to limit the use of metal restraints in Colorado prisons. Regulations governing no-knock warrants may return, a year after a bipartisan group of state officials called them “undesirable” and that they “should be avoided.” Rep. Jennifer Bacon, a Denver Democrat, has also said the legislature may take action related to Miranda rights, after the U.S. Supreme Court hollowed out civil liability penalties earlier this year.

Republican lawmakers had planned to circle back and attempt to further tighten drug possession penalties this year. But their losses in both chambers have placed law enforcement groups in a more defensive posture. Last year’s extensive fight over fentanyl legislation was divisive and bruising, and its memory may well make legislators wary of jumping back into a similar fight so soon, particularly as their latest change is still being implemented.

Lynch was an architect of the fentanyl bill last year but removed his name from sponsorship in protest of penalties he saw as too weak to address the problem. While he argues the ongoing crisis proves too little has been done, it can also be hard for lawmakers to shift course — especially if too little time has passed to truly determine a policy’s effectiveness.

“I don’t know that we’ve given the proper amount of time for (the new fentanyl law) to play out, but I don’t see that not continuing to be the forefront of the judiciary committee because we’re still losing people,” Lynch said.

State Democrats already proved prescient with a move last legislative session to enact a law protecting the right to an abortion in Colorado, just months before the high court repealed the constitutional protections to the procedure established in Roe vs. Wade.

Advocates are planning a ballot measure in 2024 to enshrine abortion access in the constitution, a push that may also include an effort to end the prohibition on state money being used for the service. But it’s not the only shifting constitutional ground lawmakers may have to navigate. Shortly before the election, Bacon ticked off affirmative action, protecting undocumented immigrants who arrived in the country as children, commonly known as Dreamers, and marriage equality as issues Colorado leaders may need to take up because of signals from the court.

Colorado still has a constitutional amendment banning gay marriage, passed by the voters in 2006. It’s essentially moot now because of a 2015 U.S. Supreme Court decision, but the lack of statutory or constitutional protections in Colorado has given activists pause in light of the court’s more recent moves. There’s certainly interest in addressing the constitutional provision, even in the wake of the federal passage of the Respect for Marriage Act, and a coalition reportedly began to take shape in late summer.

Traditionally, housing policy has been largely left for local governments to address. But given the scale and consistency of the problem across the state, the legislature may play a larger role in the issue going forward.

“There’s a big debate about local control when it comes to land use at the local level,” Fenberg said. “At what point is it appropriate to give cities the authority to do what they want to do, and at what point does the state say this is a statewide problem and we need to intervene?”

Rent control or stabilization, in some form or another, remains one of the most controversial policy options, and multiple housing advocates told the Post they expect the issue to resurface this year. But Polis’s known opposition gives it a difficult path forward; Zenzinger called it a “non-starter” for the governor.

Rep.-elect Javier Mabrey, a Denver Democrat and eviction defense attorney, said that housing may well be the “number one priority” for House Democrats this year. He said lawmakers should look at just-cause eviction, meaning legislation that would prevent evictions unless for a “good reason,” like illegal conduct or not paying rent.

Pugliese, the assistant House minority leader, noted the Republican caucus’ emphasis on protecting local control for building codes. In particular, she noted her party’s opposition to regulations they argue drive up housing costs and those will hit municipal pocketbooks in a time of tight budgets.

“There will definitely be some areas where we cannot find common ground, but that’s where I hope we’ll find true civil discourse and an opportunity to discuss different perspectives,” she said.

For more than a decade, Colorado has underfunded K-12 education compared to what the state constitution requires. Last year, lawmakers celebrated a historic buydown of the deficit, officially known as the budget-stabilization factor. Just a few years after the deficit topped $1 billion, they had slashed it to $321 million.

But with inflation and general economic uncertainty casting a pall over budget forecasts, hopes of erasing the deficit completely have dulled.

Zenzinger called ending the deficit “probably my No. 1 priority.” But even if lawmakers erase it this year, she worries too much money, too fast, could just lead to whiplash of renewed cuts if the funding isn’t sustainable.

“We just can’t, quite frankly, buy it down as quickly as we want to because we feel like stability and funding schools at a level in which they can count on is also really important,” she said. “You can’t raise teacher salaries on one-time money. So if we put it in one year and we can’t cover it the next year, then we just have to take it away.”