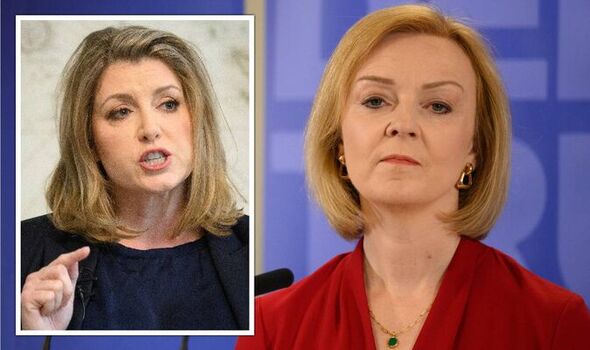 Figures on the Tory Right were uniting behind Liz Truss in the race to replace Boris Johnson. The Foreign Secretary was handed a massive boost after Suella Braverman came out in support. Half of her 27 backers in the second-round knockout ballot are expected to follow suit.

Her campaign chief Steve Baker said he also will now be supporting Foreign Secretary Liz Truss. Mr Baker said: “Suella has my complete loyalty. What she has decided, I will support.”

Rishi Sunak topped the poll of Tory MPs with 101 votes, gaining 13 backers since the previous round. But International Trade Minister Ms Mordaunt gathered more momentum with an increase of 16 votes to 83.

Ms Truss was in third place, with 64 votes, gaining 14. But Ms Mordaunt’s surge triggered concerns on the Right that she and Mr Sunak – both seen as centrists committed to high-spending policies – will reach the final head-to-head vote by the party’s grassroots.

Leading Brexiteer Lord Frost launched a scathing attack on Ms Mordaunt as not being up to the job, was last night understood to be preparing to announce his support for Ms Truss.

And hardline Eurosceptic Attorney General Ms Braverman, eliminated from the contest after coming last, questioned whether Ms Mordaunt, who campaigned for Leave in the 2016 EU referendum, was really an “authentic Brexiteer”. 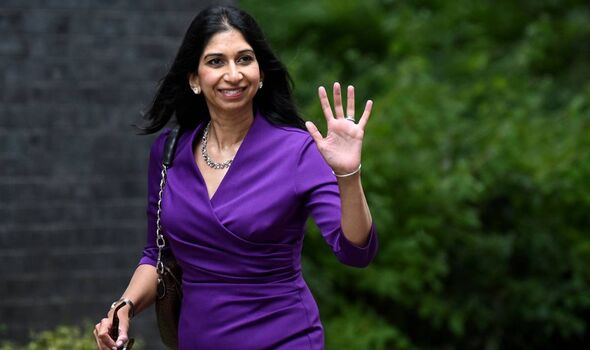 Ms Braverman said: “Ultimately, I was the only authentic Brexiteer. The party has turned me down. I’m going to have to find someone who comes close to what my policy platform was.”

She added: “My perception of Penny is she takes a different view to me when it comes to gender ideology and the position of trans.

“For example, I think she said a trans woman is a woman. I disagree with that.”

Allies were pitching Ms Truss as the candidate to unite the Right of the Tory Party last night, and with the potential to become the best-placed candidate to beat Mr Sunak in the final run-off.

A spokeswoman for Ms Truss said: “Today’s results show that Liz Truss is attracting a wide range of supporters from across the Conservative Party. Suella Braverman ran a campaign that she can rightly be proud.

“As Liz set out in her speech, now is the time for MPs to unite behind the candidate who will cut taxes, deliver the real economic change we need, continue to deliver the benefits of Brexit and ensure Putin loses in Ukraine.

“Liz Truss has the experience to deliver from day one, grow our economy and support working families and then beat Labour.”

Treasury Chief Secretary Simon Clarke, a supporter of Ms Truss, insisted she could still win despite coming third. He said: “This is very much on the trajectory we thought. We are attracting broad support from people across the party.”

Former Tory leader Sir Iain Duncan Smith, who is also backing Ms Truss, has urged fellow Brexiteers to unite behind her and warned that divisions could allow Ms Mordaunt to slip through.

But senior Tory MP David Davis criticised the “black ops” attacks being targeted at Ms Mordaunt, the party candidate he is backing. Asked about Lord Frost and Simon Clarke’s criticisms, the former Cabinet minister said: “I wouldn’t describe it as friendly fire.

“My comment when I saw it earlier was it’s absolutely clockwork.

“You get to the point that somebody gets ahead and looks to be the real challenger, and then the black op starts, the incoming fire starts.”

In response to the backlash against their candidate, a source in Ms Mordaunt’s campaign said: “Penny is determined to keep this a clean contest, and has huge respect for all candidates in this process. We won’t get drawn in to needless criticisms of colleagues.”

Culture Secretary Nadine Dorries, one of Mr Johnson’s most loyal allies, urged MPs on the Tory Right to rally behind Ms Truss.

She said: “Now is the time for us all to unite behind a candidate who actually has the ability to lead the country as PM.

“As Foreign Secretary, she imposed the very toughest sanctions on Putin. That took serious ability and sheer grit.” 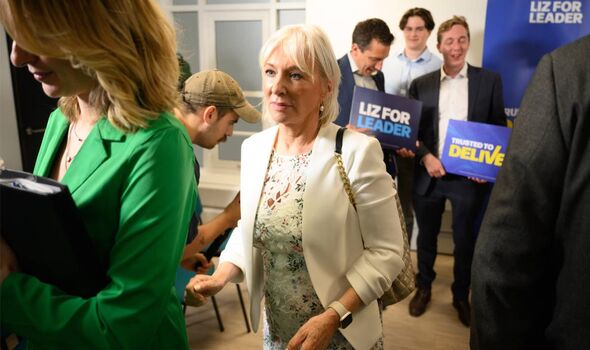 Former equalities minister Kemi Badenoch, running on an anti-woke platform and backed by former Cabinet minister Michael Gove, saw her support increase by nine votes to 49 in the ballot.

Last night, she said she was “disappointed” that Ms Braverman would back Ms Truss.

Ms Badenoch said: “I am disappointed. Suella and I are friends. I’m friends with Tom Tugendhat as well. Rishi and Liz were my senior ministers, so it’s all very close to home.

“We’re all friends, so every time someone supports one person there’s another person that’s been let down. But I’m in it to win it.

“I know people want to support the person that they think is most likely to give them a job, or who has been there the ­longest, that’s the easy thing to do. The tough thing to do is to take a risk and try something different.”

Ms Badenoch is expected to come under pressure this weekend to withdraw from the contest and back Ms Truss.

“I am prepared to give everything I have in service to our nation.

“Together we can restore trust, rebuild our economy and reunite the country.”

Welsh Secretary Robert Buckland last night came out in support of Mr Sunak for the next Tory leader.

Mr Buckland said: “Now is the time for serious leadership, that is why I am proud to be backing Rishi Sunak as our next Prime Minister.”

Senior backbencher Tom Tungendhat, backed by the One Nation group of MPs on the party’s centre-Left wing, refused to withdraw from the contest despite seeing his ­support fall from 37 to 32 between the two rounds.

Conservatives on the party’s low-tax, free-marketeer wing are paying the price for their disunity in the early stages of the Tory leadership race.

Various factions including the newly-relaunched Conservative Way Forward and the European Research Group (ERG) failed to coalesce around a single figure.

As a result, Liz Truss, Kemi Badenoch and Suella Braverman – who was eliminated from the contest – have been scrabbling away for the same votes in the early stages.

None of them managed to build the momentum needed to get in touching distance of a place in the final run-off ballot.

Loyalty to Boris Johnson is part of the reason they have been ambushed by rivals on the Tory centre-Left.

While Ms Truss and other ministers were concentrating on their government jobs over recent months, both Rishi Sunak and Penny Mordaunt were discreetly gathering support for challenges to the Prime Minister’s job.

As a result, the former chancellor and International Trade Minister had campaigns ready to roll while centre-Right Tories were still squabbling among themselves.

Mr Sunak has been condemned as a high-spend, high tax “socialist” at the Treasury by his critics on the Tory Right. 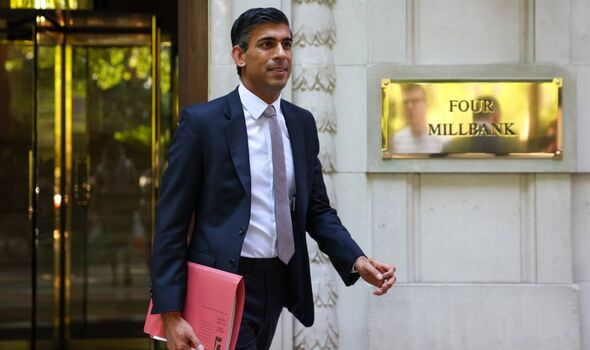 Ms Mordaunt has shown little enthusiasm for radical tax cuts and is seen as liberal on social issues.

Polls suggest grassroots Tories are likely to opt for the most Right-wing choice when the runoff between the two final candidates arrives.

On current form, there will not be an unapologetic Right-leaning Conservative on the ballot paper.

But that could still change with more rounds of voting among MPs next week.

Ms Truss, who trailed Ms Mordaunt by 19 votes in the ballot, still has a chance to reach the final two but has her work cut out.

This weekend, MPs will be away from the Westminster hot house.

Yet the debate will rage by phone, email and WhatsApp in a desperate effort to unite the Right.