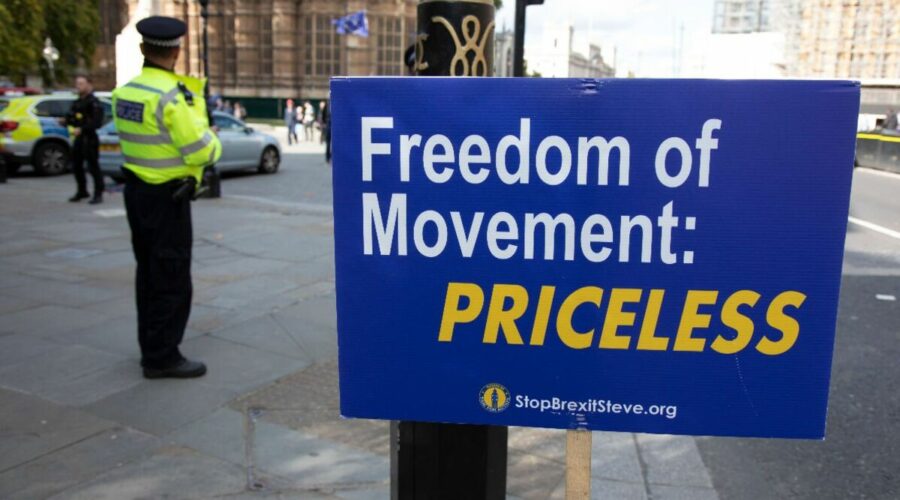 The UK’s decision to cut ties with the European Union led to a shortfall of 330,000 people in the UK labour force, a report by leading researchers has claimed. A joint study by the Centre for European Reform (CER) and UK in a Changing Europe also concluded Brexit led to an increase in immigration from non-EU countries.

However, the report found non-EU immigration was not able to compensate for the loss of workers from neighbouring countries.

The think tanks’ calculations took account of recent Office for National Statistics (ONS) figures that showed an overall reduction in net immigration of 540,000 to June 2022.

It also used the ONS annual population survey to model how the UK’s labour force would have looked if Freedom of Movement continued.

The UK’s point-based post-Brexit immigration system has made it more difficult for those without qualifications to move to the UK to work.

JUST IN: Rishi Sunak ‘doubles down’ on plans for a bonfire of 4,000 pieces of hated EU law

Around 130,000 non-EU arrived in the UK which cushioned the blow but “large shortfalls” remained in six key sectors.

Transport and warehousing was worst hit, with a reduction of 128,000 of EU workers, or eight percent of total employment in that sector.

Wholesale and retail witnessed a three percent drop, down by 103,000 EU workers.

Hospitality and food was hit by a four percent drop, with a reduction of 67,000.

Manufacturing and construction were both down two percent.

There was also a decline of 32,000 EU workers in administrative and support areas.

The report revealed: “In more skilled sectors, such as healthcare, education and ICT, an increase in non-EU workers more than compensated for losses of those from the EU.”

They concluded: “Overall, the new system is working broadly as Leave advocates promised.”

“The real issue ⁦⁩in the UK labour market is the one in five working age people, including over 50s, written off.”

A spokesperson for the Home Office said: “The public rightly expects us to control immigration, which is why our points-based system delivers for the whole of the UK by balancing prioritising the skills and talent the UK needs with encouraging long-term investment in the domestic workforce.”

They added: “We have expanded the skilled worker route to include medium-skilled jobs and it now covers 60 percent of jobs in the economy.”