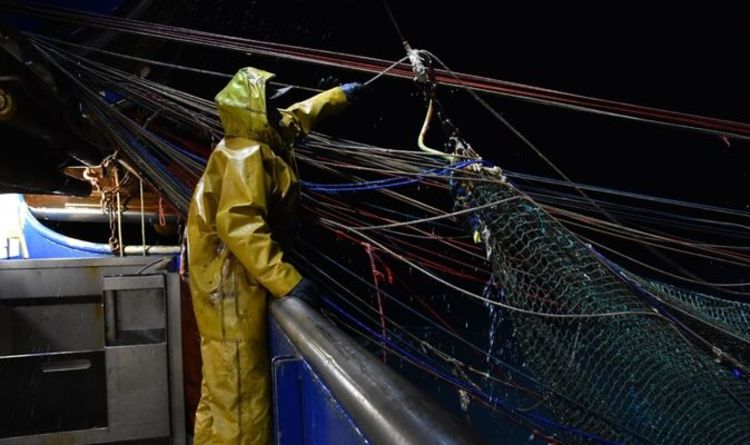 Under post-Brexit rules, fishermen from the Northern European nation are no longer allowed to fish up to the UK’s 12-mile coastal border. This makes Norwegian boats desperate to hoover up their catch before the fish head west in September. An imminent “herring and mackerel race between Norway and the UK” has been predicted by German TV channel N-TV.

Norway is not a member of the EU but it is associated with the bloc through its membership of the European Economic Area (EEA).

Norwegian broadcaster NRK has warned that mackerel and herring will be too young to be caught in August.

He called it “an indirect consequence” of Britain’s decision to bow out of the 27-member bloc.

Mackerel in the region typically begin their life during the warmer spring months in Irish and British waters.

Eventually, they will return south and east to spawn again.

And what is key is the level of growth they undergo during this cycle.

A mackerel caught in British waters later this year will be bigger and fatter than one caught in Norway in August.

However, Norwegian fishermen now have no choice but to scoop up what fish they can get their hands on before they swim towards Britain ahead of the colder months.

When the UK cut ties with Brussels it left the club’s controversial Common Fisheries Policy (CFP).

In April it was revealed that the UK Government failed to strike a fishing deal with Oslo.

This led to widespread anger and condemnation from fishing bosses and Remainers.

Prime Minister Boris Johnson’s failure to reach a pact was seen as a major setback for Britain’s long-suffering coastal communities.

The Government claimed it had tabled a “fair deal” but the two sides were simply “too far apart” to reach an agreement this year.

As a result, the Kirkella super trawler has been grounded in Hull.

Before Brexit, the freezer trawler caught 10 percent of the fish sold in chip shops up and down the country.

The boat remains at the port six months after the Brexit transition period ended.