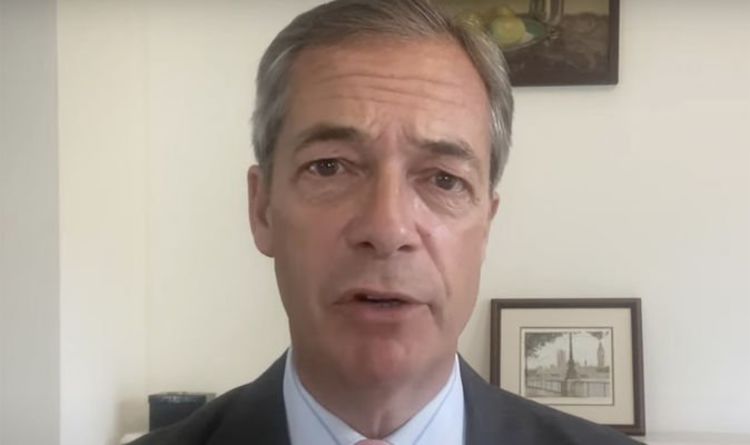 Nigel Farage urged Boris Johnson to slap his French counterpart with an ultimatum. The GB News’ host said that Britain’s problems over the Northern Ireland Protocol and post-Brexit fishing come down to France. Mr Farage warned that the British Prime Minister is heading towards a “big confrontation” with Emmanuel Macron.

Mr Farage told GB News viewers: “It all comes down to one word, France.

“Because the French and Macron are not just furious about Brexit.

“They are furious about the AUKUS deal and their 20th-century submarine technology being replaced by our 21st-century technology.

“But you have the fishing dispute, which is astonishing.”

The former MEP continued: “We have allowed 1,700 EU boats into our national waters.

“And just because a few boats tried to pull the wool over our eyes by appealing to fish up to the six-mile line, we have the French threatening to blockade British goods.

“They are threatening to cut off the electricity supply to Jersey.

“I see the Northern Ireland Protocol as part of a much bigger confrontation we have coming up with France.

“Will the Prime Minister trigger Article 16 if he thinks British goods will be blocked at the French ports – that’s what it comes down to.”

Earlier this week, France lashed out at Britain after Jersey refused to grant fishing licences to 75 French fishing vessels to access its waters from 30 October.

Paris is also angry after it was revealed the UK had offered just 12 licences to smaller French fishing boats out of 47 applications.

Annick Girardin, France’s Maritime Minister, said: “On every subject, the British are dragging their feet or failing to live up to their commitments.”

He told Express.co.uk: “It’s very regrettable that France, an important European country, should resort to attempting to bully the small island population of Jersey.

“However, the French should remember what happened the last time they tried that: the Royal Navy was sent in.

“They should also not forget that boycotts can operate in both directions.

“The UK is an important market for France, but French wine can easily be replaced by the excellent products of Australia, New Zealand and Chile.

“French Brie and Camembert can be replaced by our own home-produced cheeses.”