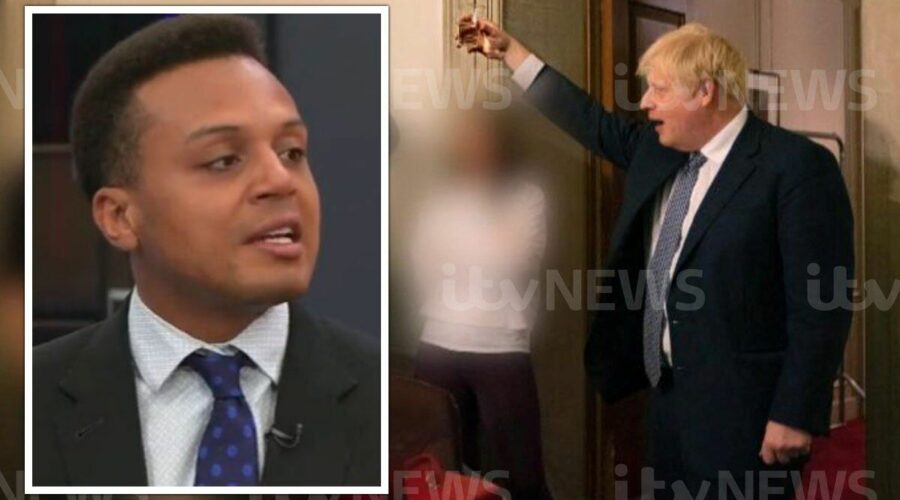 Albie Amankona, political commentator and co-founder of Conservatives against Racism, told GB News that while the Prime Minister is “certainly in a very difficult spot” following the leaking of photos that show him socialising during an event for which others have received fines, it is the Metropolitan police that face “another question”. Mr Amankona asked how it was possible “that one person could get a fixed penalty notice but another person would not”, especially when, in this instance, the PM has been captured drinking and socialising at the event.

The political commentator said: “The Prime Minister is certainly in a very difficult spot at the moment.

“The risk with the Sue Gray report really I think was with the pictures because they can speak a thousand words.

“No 10 will be waiting to see how this picture, which will be pre-released, falls down with the public.

“But I think it raises another question, maybe not directly to the Prime Minister or No 10 but more to the Metropolitan police. And that is: How can someone attend an illegal party legally?

“If the Metropolitan police have given out fines for this event on November 13, how is it that one person could get a fixed penalty notice but another person would not?”

Despite the picture appearing to implicate the PM insofar as placing him at an “illegal event”, Mr Amankona added that Downing Street was “maybe even pleased” it had been leaked.

He said:  “We have been hearing reports that Downing Street has been quite relaxed about this photo, maybe even pleased, because it does sort of stop the public’s imagination running wild with what could have been happening. It’s not a terrible picture by any stretch of the imagination”

Attempting to draw a clearer conclusion to what the picture says about whether the PM broke the rules, however, GB News co-host Mr Holmes said: “It’s like VAR! You’re either caught offside or you’re not. He was caught offside, even if just for a nanosecond.”

Photos of Mr Johnson show the PM raising a glass during a leaving party on November 13, 2020 for his director of communications Lee Cain.

While the police have issued fixed penalty notices to at least one other person at the drinks party, Mr Johnson was told last week that he would not receive another fine.

The fixed penalty notice handed to another party attendee was for the offence of participating in an indoor gather with more than two people.

Allies of the PM suggest that he only appeared for ten minutes at the event, a claim potentially strengthened by the sight of his red box in the corner of the photograph.

Mayor of London Sadiq Khan, who has been particularly critical of the Metropolitan Police of late, overseeing the departure of its commissioner Cressida Dick earlier this year, called this morning for the police to “explain why they reached their conclusions”.

“And just like you, I suspect, yesterday was the first time I saw the photograph of Boris Johnson raising a glass, clearly bottles of wine lying around, others with wine in their hand, on a day when he said in the Houses of Commons, and I speak as a former parliamentarian and I know the importance of not lying or misleading in the House of Commons, that there wasn’t a party.

“So you know, of course, Sue Gray will publish her report this week and of course, the Prime Minister will have to answer for himself, but I think the police should explain why they reached their conclusions and provide that clarity.”