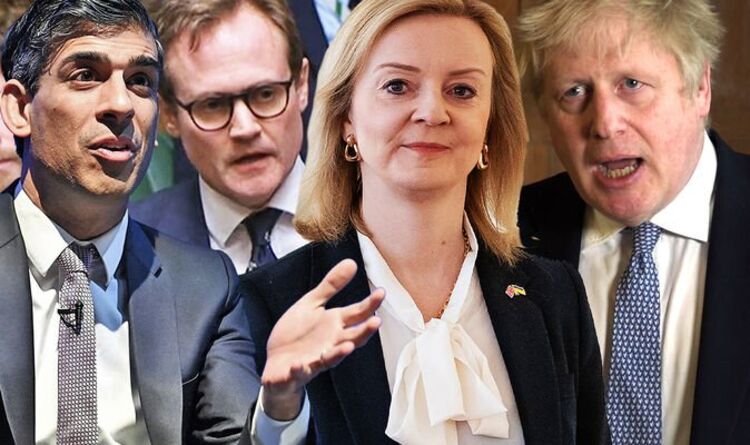 On Tuesday, the Government announced that Prime Minister Boris Johnson had been fined by the Metropolitan Police for attending a lockdown birthday gathering for himself at No 10 Downing Street. The revelation has led to outrage from opposition MPs and sections of the public, with calls growing for the PM to prematurely end his time in office. But which Tories could be in line to replace him?

Liz Truss has become a more prominent name in the public sphere recently owing to her appointments as Foreign Secretary and Brexit minister respectively.

She’s also now the clear favourite with most bookmakers to replace Mr Johnson after the Chancellor, Rishi Sunak, saw his approval rating plummet in the past month.

A recent survey by the Tory website Conservative Home showed that she is the preferred choice with Tory voters to become the next PM.

Currently holding office in the position of Chair of the Foreign Affairs Select Committee, Tom Tugendhat has been in politics for less than seven years.

However, he’s viewed as a potential future Tory leader and is well respected for his time serving as a war veteran in Iraq and Afghanistan.

Jeremy Hunt is an experienced Tory backbencher who has been an MP since 2005.

The incumbent Chair of the Health and Social Care Committee has previously run to become the leader of the Conservative Party in 2019 and has a wealth of experience in politics to add to his credentials.

It remains to be seen if he now wields the necessary influence among his peers after he was omitted from the Cabinet when Mr Johnson became PM nearly three years ago.

Defence Secretary Ben Wallace holds one of the most senior positions in the Government and has worked as an MP for nearly 20 years.

He has become a more familiar face with the public in the past month owing to the Russian invasion of Ukraine, often explaining how Britain is supporting Kyiv’s war efforts.

As the MP for Portsmouth North, Penny Mordaunt is viewed as a popular figure within the Conservative Party.

In recent years, the 48-year-old has gradually worked her way through various ministerial roles to her current position of Minister of State for Trade Policy.

For long periods, the Chancellor was the clear favourite to take over from Mr Johnson.

However, criticism around his handling of the cost of living crisis – and the announcement that he too has been fined by the Met for breaching lockdown rules – has significantly drained his support base.

Sajid Javid replaced Matt Hancock as Health Secretary last summer and has been widely praised for his style of leadership and communication.

The 52-year-old has a wealth of experience in politics having served as home secretary and chancellor in recent years.

Michael Gove has unsuccessfully run to become leader of the Conservative Party in 2016 and 2019 – finishing in third place on both occasions.

Like many on this list, he’s also worked for more than a decade in politics. Between 2010 and 2014 he held the position of education secretary, for which he was criticised by teachers unions for his attempts to overhaul the English education system.

As Education Secretary, Nadhim Zahawi forms a key component of the current cabinet, though it would be somewhat of a shock if he were to become the next Tory PM.

He was previously the under secretary of state for Vaccine Deployment between 2020 and 2021, overseeing the rollout of the Covid vaccination programme.

He was heavily criticised for his handling of the aftermath of the fall of Afghanistan and has been involved in politics since 2006.

13/04/2022 Politics Comments Off on Boris Johnson replacement: Who could be the next PM? Top 10 Tories in line for job
Markets