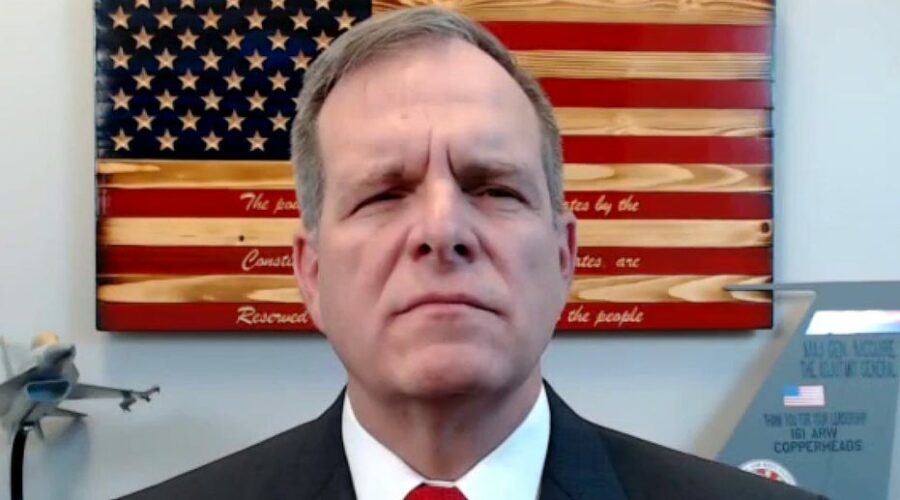 Michael McGuire, retired National Guard general, discusses the crisis at the border and announced his bid for U.S. Senate.

The recently retired adjutant general of the Arizona National Guard on Tuesday launched a Republican campaign for the Senate in his home state, becoming the latest contender to join a growing GOP field of candidates hoping to square off next year against freshman Democratic Sen. Mark Kelly, whom national Republicans view as vulnerable in the 2022 midterm elections.

Michael “Mick” McGuire, whose numerous appearances on TV during coronavirus briefings amid the pandemic made him a familiar face to Arizona voters, said in a statement that as “a fourth generation Arizonan, a constitutional conservative, and someone who took an oath to protect and defend our nation I am ready to serve again.”

McGuire, a retired Air Force fighter pilot, stepped down in April after eight years of managing the daily operators of the state’s Army and Air National Guard as well as steering Arizona’s Department of Emergency and Military Affairs. He oversaw all of the guard’s COVID-related missions, from helping with vaccine distribution to distributing medical supplies to rural and tribal communities.

“I served for nearly 34 years as a commissioned officer and I believe that the country is in need of principled, moral and ethical leadership. I’m looking to bring that as a conservative constitutionalist and I say that the road to 51 leads through Arizona,” McGuire said in an interview Tuesday morning on “Fox & Friends.” 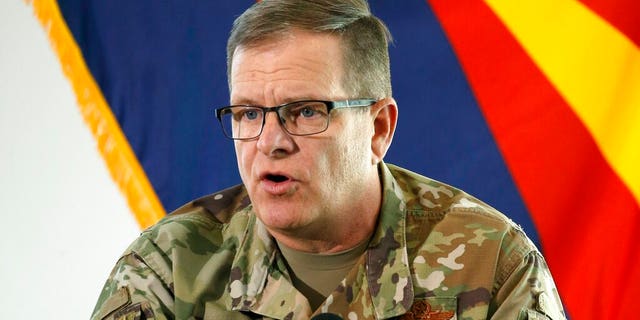 In this May 20, 2020, file photo, then-Arizona National Guard Maj. Gen. Michael McGuire, director of the Department of Emergency and Military Affairs, answers a question at a news conference in Phoenix. McGuire, the former head of the Arizona National Guard, has filed papers to run for the U.S. Senate, joining what’s likely to be a crowded field of candidates seeking the Republican nomination.
(AP Photo/Ross D. Franklin, Pool)

McGuire is expected to begin meeting with voters from all 15 Arizona counties, from the northern parts of the state to the U.S.-Mexico border in the south.

Taking aim the Biden administration over this year’s surge of migrants crossing the border, McGuire charged that the administration has “been derelict in their duty.”

He argued that “this is the first administration that hasn’t committed to doing the things they need to do. One is build the wall, secure the border physically. Two, provide the resources to the agents who need to enforce that, and then three, make sure that we look at laws subsequent to those changes that make us all safer in our communities.”

McGuire becomes the second Arizona Republican to jump into the state’s 2022 Senate race, which could determine the balance of power in the chamber.

The U.S. Senate is currently split 50-50 between the two parties, but the Democrats hold a razor-thin majority due to the tie-breaking vote of Vice President Kamala Harris, who serves as president of the Senate. That means the GOP only needs to pick up one seat to regain the majority.

Republicans are defending 20 of the 34 seats up for grabs in 2022, including open seats in the key battlegrounds of North Carolina and Pennsylvania as well as in Ohio, Missouri and Alabama. But Republicans see an opportunity to flip a blue seat red in Arizona, another battleground state, where Kelly won last November by less than two-and-a-half points to serve the final two years of the term of the late GOP Sen. John McCain.

McGuire joins solar-business executive Jim Lamon in launching a GOP campaign. Lamon, a strong supporter of former President Trump, has already dished out hundreds of thousands of dollars to run TV ads and sent campaign mailers as he introduces himself to voters. Lamon has also been a major backer of the Arizona GOP, with his company heavily investing in state Republican efforts to register voters ahead of next year’s midterm elections.

Tucson Republican and venture capitalist Blake Masters, who has the backing of Libertarian tech titan Peter Thiel, may jump into the race. Thiel, who co-founded PayPal, is reportedly infusing $10 million of his own money into the Saving Arizona PAC, to support Masters, who has served as chief operating office of Thiel Capital and president of the Thiel Foundation.

Brnovich was recently criticized by Trump for not supporting the ongoing partisan and controversial review of ballots cast in last November’s election in Maricopa County that was launched by state Republican lawmakers. Trump narrowly lost Arizona to President Biden last year, and has repeatedly made unfounded claims that the election in Arizona and a handful of other states he narrowly lost was “rigged” and “stolen.”

Term-limited Republican Gov. Doug Ducey, whom national Republicans attempted to recruit, decided at the beginning of this year against making a 2022 Senate bid.

“McGuire and every other Republican candidate will be spending months exposing each other’s vulnerabilities and defending their party’s unpopular agenda,” DSCC spokesman David Bergstein charged.