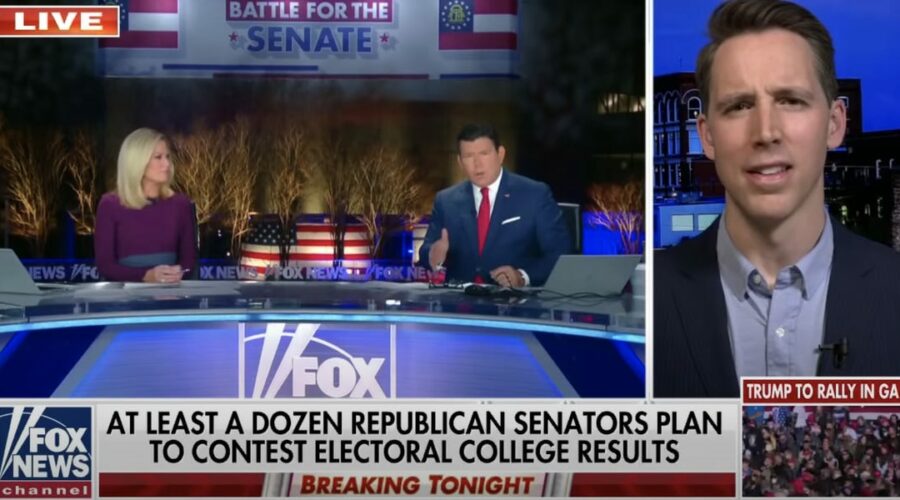 "I just want to pin you down on what you're trying to do," Baier said after three minutes of back and forth with the Missouri Republican on Monday night. "Are you trying to say, that as of January 20th, that President Trump will be president?"

"That depends on what happens on Wednesday, I mean, this is why we have the debate," Hawley replied, before Baier cut him off to set the record straight.

"No, it doesn't," Baier said, explaining that states have certified the election, and "by the Constitution, Congress doesn't have the right to overturn the certification, at least as most experts read it."

A strong supporter of President Donald Trump, Hawley became the first senator to declare that he plans to object to the electoral process, arguing that "voters concerned about election integrity deserve to be heard." After his announcement last week, at least 12 fellow Republican senators followed suit, joining dozens more House Republicans who said they will object to the certification.

The plan is almost certain to fail to alter the election outcome, though it may delay certification of Biden's win. Last month, electors of all 50 states and the District of Columbia formally cast their votes for president, a routine procedure to affirm Biden's victory of 306 electoral votes against Trump's 232.

On Wednesday, Congress is due to finalize that process. Vice President Mike Pence will preside over a joint session to officially tally the votes.

Should lawmakers object, they'll be allowed debate time, but will have to launch their challenges toward states individually, Insider's Grace Panetta previously reported. However, in order to overturn any state's presidential electors, a majority vote is required in both chambers. The Democratic-controlled House will effectively sink such efforts.

A slew of Republican lawmakers have opposed Hawley's aims, and publicly blasted the broader GOP effort to object to the certification process. Hawley has come under fire from a number of his colleagues, criticizing his move as cozying up to Trump's base and posturing for a 2024 presidential bid.

Trump and his allies have made several attempts to flip the 2020 election results in his favor, with no success. There has been no evidence of widespread voter fraud or voting irregularities in the race.

On Monday night Baier continued to confront Hawley on whether he seeks to overturn the election, though the senator refused to provide a clear answer.

"Don't you have a responsibility to tell them that it's not going to be President Trump as of January 21st as well?" Baier asked.

"This is about taking a stand where you can take a stand," Hawley responded.

05/01/2021 Politics Comments Off on 'Are you trying to say' that 'Trump will be president?': Fox News host Bret Baier grills Sen. Josh Hawley over his election challenge
World News