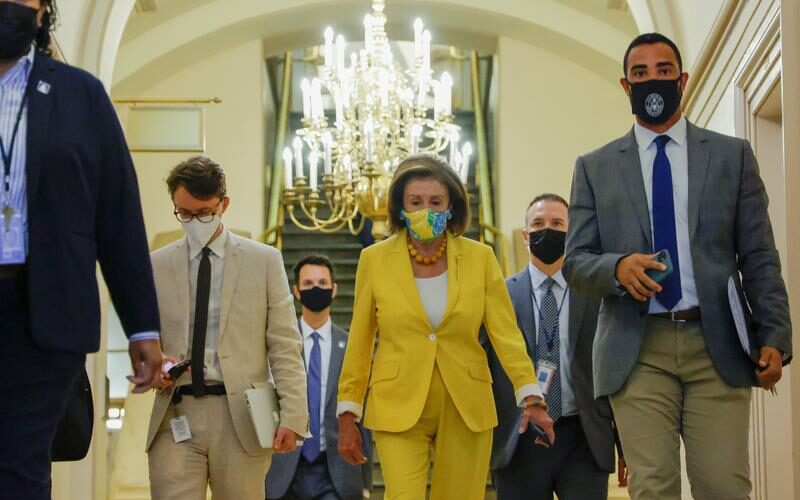 WASHINGTON (Reuters) – Democrats returned to the U.S. House of Representatives on Tuesday to try to resolve divisions between centrists and progressives that threaten their ability to pass key parts of President Joe Biden’s agenda.

Lawmakers met behind closed doors to plot a course of action, one day after an apparent lack of support forced them to postpone around midnight a planned vote on Biden’s ambitious plan to expand child care and other social programs.

The delay pointed to possible trouble ahead for Biden’s fellow Democrats, who have little room for error as they try to approve two massive spending initiatives through the House and the Senate, where they hold razor-thin majorities.

House Speaker Nancy Pelosi had hoped to quickly approve a $3.5 trillion budget outline here, which would enable lawmakers to begin filling in the details on a sweeping package that would boost spending on child care, education and other social programs and raise taxes on the wealthy and corporations.

But centrist Democrats, led by Representative Josh Gottheimer, have refused to go along, saying the House must first pass another Biden priority: a $1 trillion infrastructure bill here that has already won approval by Republicans and Democrats in the Senate.

Liberals, including Representative Alexandria Ocasio-Cortez, have said they won’t support the smaller package without the larger one, fearing they will lose leverage.

Democrats hold a narrow 220-212 majority in the House and Republicans have said they will not support the budget plan.

Representative Jim Clyburn, the chamber’s No. 3 Democrat, predicted they would pass the measure when the House reconvenes at noon (1600 GMT).

“We’re in a pretty good place,” he said on MSNBC.

Liberals worry they might lose leverage on the social-spending effort if they first pass the infrastructure bill.

Democratic Representative Richard Neal said negotiations between the two factions have grown more complex as the dispute has spilled out into the open.

“We always anticipated that this would be a long slog,” he told reporters.