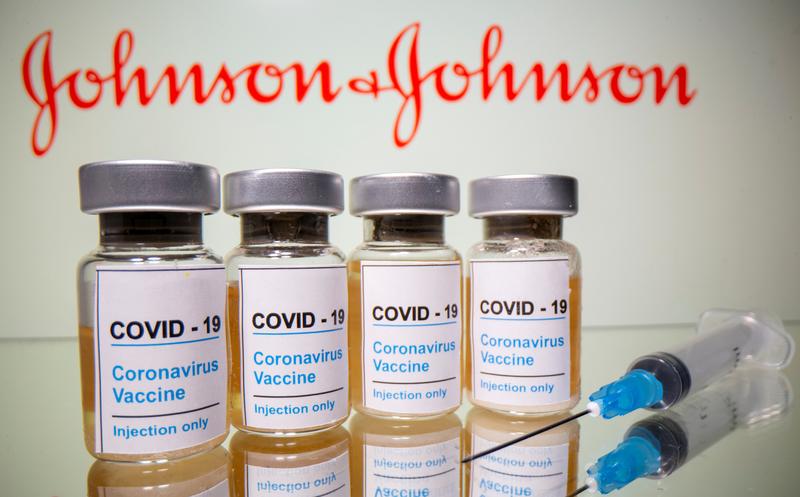 (Reuters) – The Biden administration is exploring every option for increasing manufacturing of Johnson & Johnson’s COVID-19 vaccine, which is under regulatory review, and said on Friday that currently expected levels of early doses were less than hoped.

FILE PHOTO: Vials with a sticker reading, “COVID-19 / Coronavirus vaccine / Injection only” and a medical syringe are seen in front of a displayed Johnson & Johnson logo in this illustration taken October 31, 2020. REUTERS/Dado Ruvic/Illustration/File Photo

The White House has invoked the Defense Production Act to help Pfizer Inc ramp up COVID-19 vaccine production and that “every option” was on the table to produce more Johnson & Johnson vaccine should it be authorized.

It will also use the wartime powers to increase at-home COVID-19 tests, and make more surgical gloves in the United States, officials said at a Friday media briefing.

“As is the case with other vaccines, we have not found that the level of manufacturing allows us to have as much vaccine as we think we need coming out of the gate,” said Andy Slavitt, senior adviser to the White House’s COVID-19 response team, referring to the J&J vaccine.

J&J applied on Thursday for U.S. emergency use authorization. It expects to have some vaccine ready for distribution as soon as authorized but has not said how much.

Under the authority of the Defense Production Act, the government will give priority ratings to two components important to Pfizer’s vaccine production – filling pumps and tangential flow filtration units, the officials said.

“We told you that when we heard of a bottleneck on needed equipment, supplies, or technology related to vaccine supply that we would step in and help, and we were doing just that,” said Tim Manning, the supply chain coordinator for the national COVID-19 response.

The government will also invoke its powers under the Defense Production Act to increase at-home COVID-19 tests with six, unnamed manufacturers, aiming to produce 61 million tests by the summer, Manning said.

It will also invoke its powers to increase the nation’s supply of surgical gloves, which are made almost exclusively overseas.

Manning said the government will build factories that make the raw materials for surgical gloves and help build plants in the United States to make the gloves.

By the end of the year, he said, the United States would be able to produce a billion gloves a month.

Officials have said that once J&J’s vaccine is authorized, it would mean that millions more doses would be available to states. The vaccine is one-shot, as opposed to Pfizer’s and Moderna Inc’s two-dose vaccines, and can be stored in a refrigerator.

Officials have hoped that the ease of giving the J&J vaccine will mean that states will be able to more quickly immunize residents.