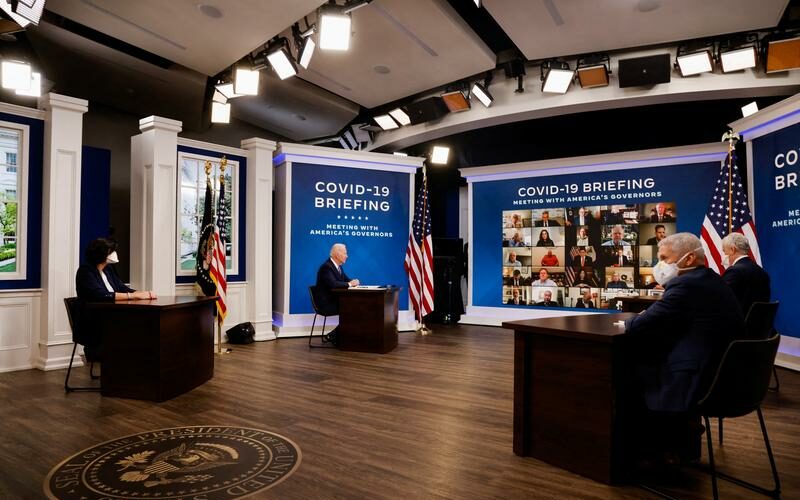 WASHINGTON (Reuters) – President Joe Biden on Monday pledged to ease a shortage of COVID-19 tests as the Omicron variant threatened to overwhelm hospitals and stifle travel plans as it spreads across the United States this holiday week.

“Seeing how tough it was for some folks to get a test this weekend shows that we have more work to do,” Biden said as he joined a call with the administration’s COVID-19 response team and state governors. “It’s clearly not enough.”

Biden said his administration’s steps include using the Defense Production Act to boost at-home test manufacturing and making it easier to use the Google search engine to find a nearby testing location.

The Centers for Disease Control and Prevention (CDC) said it was shortening the recommended time for isolation for Americans with COVID-19 to five days, as long as they show no symptoms, from its previous guidance of 10 days.

U.S. and state officials are bracing for a wave of more cases following the Christmas holiday, with hospitalizations ticking up and New Year celebrations yet to come.

Over the last seven days, the average number of new cases has surged 55% to an average of over 205,000 new infections per day, according to a Reuters tally.

The number of hospitalized COVID patients has risen 3% over the same period. Overall in December, the average number of new cases has risen 143% and hospitalizations climbed 31%.

Biden warned governors that the spike in cases would probably overwhelm some hospitals, stretching staff and equipment like ventilators, particularly in areas where fewer people are vaccinated.

He declined to answer a reporter’s question about whether he endorses a vaccine mandate for domestic air travel, another step officials have discussed.

As Biden departed Washington for his home state of Delaware, he pledged cooperation with governors and said he had offered them any needed additional resources.

“They want to know what we think is going to happen,” he said.

For New Year’s Eve on Friday, officials say people who are vaccinated can safely gather with families, but larger celebrations are riskier.

“When we are talking about a New Year’s Eve party … I would recommend strongly stay away from that this year. There will be other years to do that, but not this year,” Fauci, Biden’s chief medical adviser, told CNN.

“We really still need to be extremely careful,” he said separately on MSNBC.

Last week, Biden announced reinforcements to bolster hospitals and testing, but some healthcare experts say that effort is too little, too late.

Peter Hotez, dean of Baylor College of Medicine’s National School of Tropical Medicine, said problems were exacerbated by issues such as shortages of testing and healthcare workers.

“You put all those things together into the mix and we have a very dangerous situation coming now in the country in the next couple of weeks,” he told MSNBC on Sunday.

28/12/2021 Markets Comments Off on 'We have more work to do,' Biden says, pledges more COVID tests
Markets