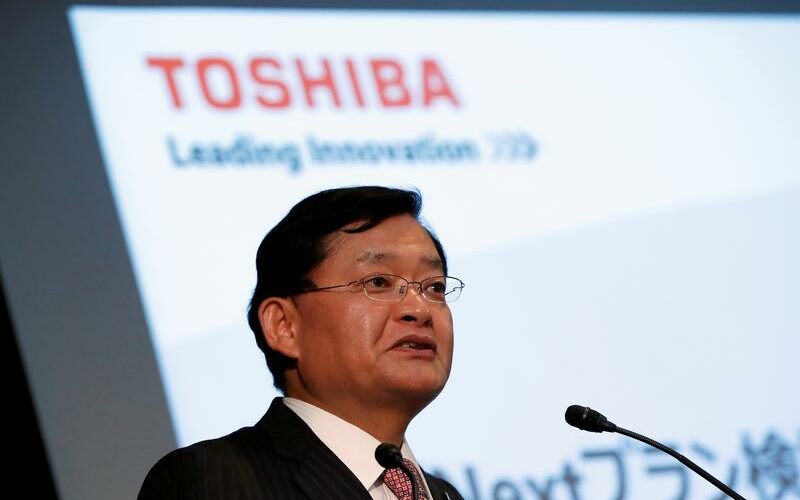 TOKYO (Reuters) – Toshiba Corp Chief Executive Nobuaki Kurumatani plans to step down as other board members consider his future at the industrial conglomerate amid controversy over a $20 billion buyout bid from his former employer, CVC Capital Partners, a source with knowledge of his decision said.

Kurumatani, who has run the company for three years, faces a board meeting on Wednesday that will consider removing him, according to the source and another one with knowledge of the discussion. Local media said company Chairman Satoshi Tsunakawa was a possible successor.

The sources asked not to be identified because they are not authorised to speak to the media.

Kurumatani’s departure could upend CVC’s offer last week to take the Japanese company private. Such a takeover could shield him and other managers from pressure from activist shareholders seeking an independent investigation into whether management pressured investors to support their decisions.

An internal investigation by Toshiba found no evidence that its executives were involved in efforts to pressurize shareholders.

CVC is considering a 30% premium over Toshiba’s current share price in a tender offer, a separate source said last week, which would value the deal at nearly 2.3 trillion yen ($21 billion).

That offer has been criticised as too low by some activist shareholders. A meeting of stock owners three weeks ago voted for an independent probe into the company.

Hong Kong-based activist fund Oasis Management criticised CVC’s proposal as “far below fair value” in a letter to Toshiba’s board chairman, Osamu Nagayama, seen by Reuters on Tuesday. It urged the company to seek other proposals for more than 6,200 yen ($56.54) per share, far above the offer of around 5,000 yen from CVC.

“If the company is open to bids, we believe there would be other bidders interested in acquiring Toshiba,” Oasis said in the letter.

U.S. hedge fund Farallon Capital Management has also asked Toshiba to seek multiple offers, although only Oasis has so far suggested a price.

U.S. investment firm KKR plans to make an offer to Toshiba that is more attractive than CVC’s bid, the Financial Times reported on Tuesday.

Oasis also asked that the company set up a special committee to discuss the CVC offer and urged that Kurumatani, as a former senior CVC executive, be excluded from the process.

Kurumatani, a former banker at Toshiba’s main lender, Sumitomo Mitsui Financial Group, headed the Japanese arm of CVC before joining Toshiba. A senior adviser at CVC also serves on the company’s board.

Toshiba shares have been hovering well below CVC’s likely offer price after hitting a four-year high last week, with the stock closing at 4,595 yen on Tuesday.

Separately, the Tokyo Stock Exchange on Tuesday cited block trades of 72 billion yen of Toshiba shares on Friday, representing about 3.4% of the company’s market value.

Any acquisition of Toshiba, one of Japan’s few manufacturers of nuclear power reactors and a maker of defence equipment, would need government approval.

13/04/2021 Markets Comments Off on Toshiba CEO to step down as board meets Wednesday to consider his future: source
Markets