Interim targets for oil and gas lending were released by CBA in a climate report on Wednesday, with the bank pledging to reduce exposure to upstream oil extraction by 27 per cent and gas extraction by 17 per cent by 2030, from a 2020 baseline. 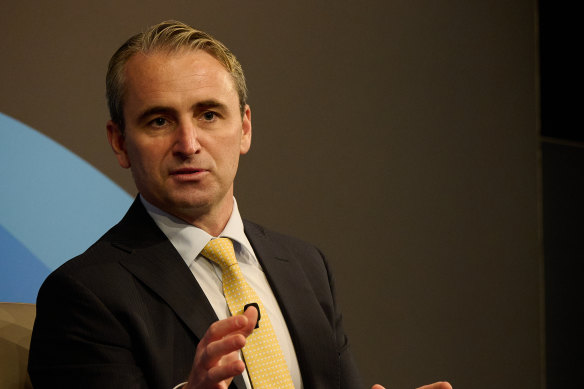 “Gas is expected to continue to play a role in electricity generation particularly during periods of low variable renewable generation or prolonged coal‑fired generation outages,” the report says.

But environmental group Market Forces, an affiliate of Friends of the Earth, responded to the report with a shareholder resolution calling on the bank to ensure its financing does not enable expansion of the fossil fuel industry.

“The fact that financing from Commbank still enables companies to expand the scale of the fossil fuel industry is a fundamental failure that needs urgent correction,” said executive director Julien Vincent.

“Finance that enables the expansion of the fossil fuel industry needs to stop now.”

“If CBA and other banks allow companies to lock in billions of tonnes more greenhouse gas emissions before exiting those relationships, these institutions will leave a trail of climate damage in their wake. Finance that enables the expansion of the fossil fuel industry needs to stop now.”

CBA has committed to phasing out exposure to thermal coal by 2030, as has Westpac, ANZ and National Australia Bank, as banks face increasing pressure from investors and regulators over climate risks.

At CBA’s annual general meeting last year, a resolution from Market Forces sought to stop the bank funding new fossil fuel projects. It received 14 per cent support in proxy votes. It was opposed by the board, with CBA chair Catherine Livingstone saying the bank had a role in supporting fossil fuel clients in their transition.

On Wednesday, CBA chief executive Matt Comyn said he disagreed with Market Forces’ characterisation of the new targets. He acknowledged that it would continue to be a topic of debate in the lead-up to its next annual general meeting in October, as he talked up the commitments made in the bank’s first standalone climate report.

“We’ve increased our ambition and reduced the temperature scenario that we are working towards, which is 1.5 degrees. We’ve signed up to the Net-Zero Banking Alliance. There’s a number of commitments that come with that, including sector level targets, and interim 2030 targets,” he said.

“For us, it’s about being very clear on our ambition, and very transparent about that and we look forward to the opportunity to continue to engage with a variety of stakeholders, and ultimately will be guided by what’s in the best interests of the country.

“We believe we’re able to do that both supporting the socioeconomic transition, and also the decarbonisation,” he said.

The bank was also criticised on Wednesday by environment group 350.org. Campaign director Kelly Albion described the targets as “nothing more than smoke and mirrors”.

“As the CommBank board reviews their oil and gas lending policy this year, we expect to see words met with action – no more financing of new or expanding fossil fuel projects and companies, and a complete phase out by 2030 of existing exposure,” she said.

The debate comes after Labor introduced its signature climate legislation to parliament, pledging to cut emissions by 43 per cent from 2005 levels by 2030. The government refused to bow to pressure from the Greens, who want funding blocked for all fossil fuel projects.

CBA welcomed the 43 per cent target in its report on Wednesday, saying it was “ambitious but achievable”. The bank also estimated that the transition to net zero emissions will require $2.5 trillion to $3 trillion of investment by 2050.

Several weeks ago, Westpac announced it wants to cut its financed emissions in oil and gas by 23 per cent by 2030, compared with 2021. National Australia Bank is the only bank to place a cap of $US2.6 billion ($3.2 billion) on oil and gas lending, releasing its policy in November last year. ANZ has said it will continue to lend to oil and gas companies with Paris-aligned plans.