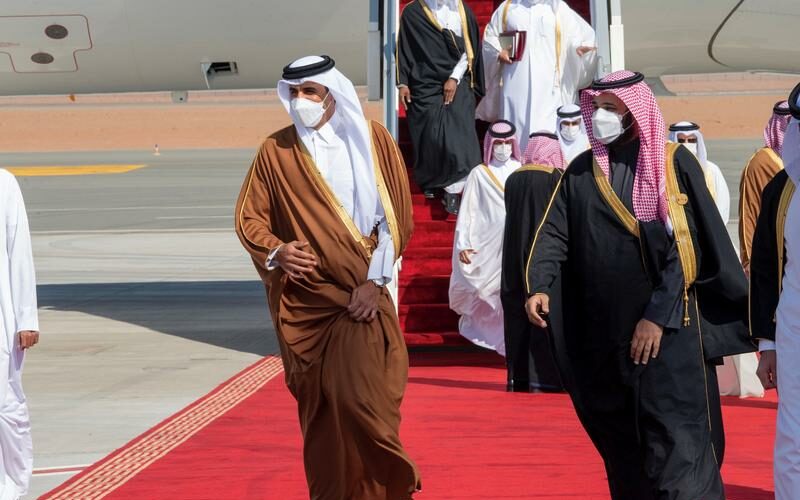 AL-ULA, Saudi Arabia (Reuters) -Gulf Arab leaders arrived in Saudi Arabia on Tuesday for a summit focused on ending a long-running dispute with Qatar as Washington pushes for a united Gulf front to contain Iran.

Before the gathering, Kuwait announced that Saudi Arabia, which along with allies boycotted Doha in mid-2017, would reopen its airspace and borders to Qatar under a deal that a senior U.S. official said would be signed in the presence of White House senior adviser Jared Kushner.

The official said Kushner, assigned to work on the dispute by U.S. President Donald Trump, helped negotiate the deal and was making phone calls on it until the early hours of Monday morning.

The breakthrough is the latest in a series of Middle East deals sought by Washington – the others involving Israel and Arab states – aimed at building a united front against Iran.

Other Gulf leaders arrived in al-Ula earlier and a source said Egypt’s foreign minister would attend the annual summit, postponed from its December date as Riyadh worked for a deal.

While Riyadh made clear it intended to lift the embargo, the other three states did not immediately comment on the issue. But the U.S. official said “it’s our expectation” they would also join. Under the emerging deal, Qatar will suspend lawsuits related to the boycott, the official said.

Diplomats and analysts said Saudi Arabia was pushing reluctant allies for the deal to show U.S. President-elect Joe Biden that Riyadh is open to dialogue. Biden has said he will take a harder line with the kingdom over its human rights record and the Yemen war.

“Despite the purported rapprochement between Gulf parties, it is worth noting that this is seemingly influenced by a desire to pre-empt pressure from an incoming Biden administration, more than a genuine commitment to conflict resolution,” said Emadeddin Badi, nonresident senior fellow at Atlantic Council.

“As such, the détente within the GCC is very unlikely to significantly affect geopolitical dynamics beyond the Gulf.”

The UAE and Egypt are at cross purposes with Qatar in Libya and over the Muslim Brotherhood.

All the states are U.S. allies. Qatar hosts the region’s largest U.S. military base, Bahrain is home to the U.S. Navy’s Fifth Fleet, and Saudi Arabia and the UAE host U.S. troops.

Qatar says the boycott aims to curb its sovereignty.

The other countries had set Doha 13 demands, including closing Al Jazeera TV, shuttering a Turkish base, cutting links to the Muslim Brotherhood and downgrading ties with Iran.