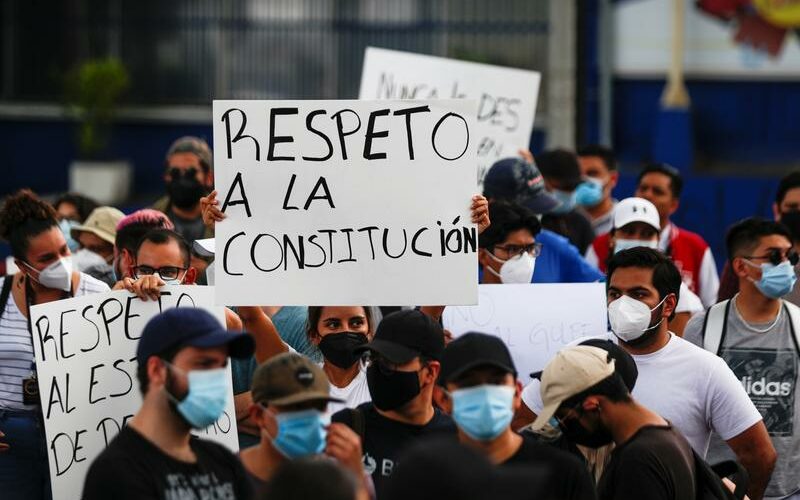 FILE PHOTO: People hold signs reading “Respect for the constitution”, as they protest against the removal of Supreme Court judges and the Attorney General by Salvadoran congress, in San Salvador, El Salvador, May 2, 2021. REUTERS/ Jose Cabezas

El Salvador is in the middle of negotiations with the IMF for a $1 billion program to patch budget gaps through 2023, following $389 million approved last month to help the government deal with the COVID-19 pandemic, Reuters exclusively reported.

But political pressure is now growing in Washington for the negotiations to be reconsidered in light of the moves against the judiciary and prosecutor.

The United States is the member with the highest voting power at the IMF. The IMF had no comment late on Monday.

A vote on Sunday by a newly formed Congress where Bukele’s allies hold a two-thirds majority dismissed Attorney General Raul Melara, whose work had included an investigation of secret negotiations between Bukele’s government and street gangs.

Hours earlier, the new Congress ousted all five judges who sit in the constitutional chamber of the nation’s Supreme Court.

Nathalie Marshik, head of EM sovereign research at Stifel said she expected the IMF program to now be on hold and saw no “catalyst for a positive outcome barring a reinstatement of the Court” and a tempering of Bukele’s rhetoric.

The country’s foreign bonds fell between 7 and 11 cents, with the 2029 and 2032 issues both down nearly 10 cents each and yielding above 8% for the first time in over two months.

The EU said in a statement the moves “violate” the rule of law and the separation of powers and that it expects the legal rights and safety of magistrates to be guaranteed.

In contrast, China, which was only recognized by El Salvador in 2018, said through its embassy it believed the Central American nation could manage its own internal affairs, citing the principle of non-interference.

Without IMF funding, El Salvador would likely need financing from elsewhere to cover budget holes in the next few years.

“China would first come to mind but we doubt the country would be ready to extend the financing El Salvador needs,” Marshik of EM said.

Biden’s administration has cited corruption in El Salvador, Guatemala and Honduras as one of the root causes of the increased flow of migrants to the U.S.-Mexico border, along with gang violence and poverty.

His administration is pressing those governments to do more to fight crime.

The five ousted judges – the most powerful jurists on the 15-member court – were among the few remaining checks on Bukele’s power. Ruling party lawmakers accused Melara, whose office wields significant power to conduct investigations, of lacking independence and impeding the government’s health strategy amid the COVID-19 pandemic.