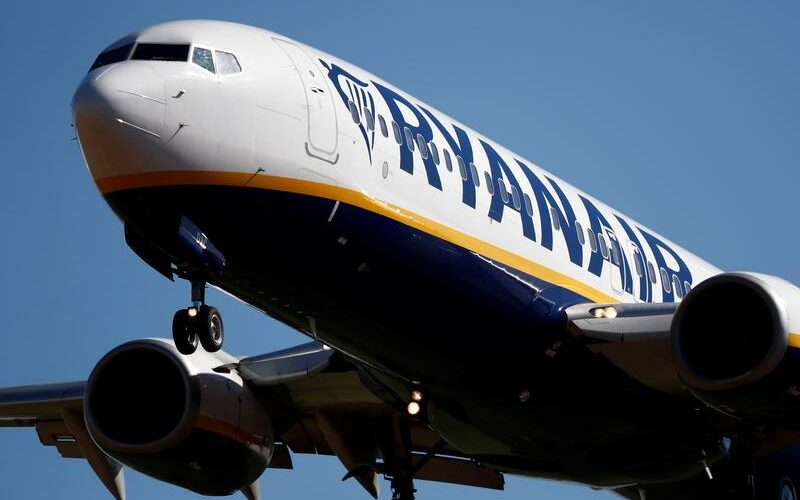 DUBLIN (Reuters) -Ryanair expects to lose close to 1 billion euros ($1.2 billion) in its current financial year, by far its worst ever performance, but Europe’s largest low-cost carrier on Monday said it remains cash rich and expects a “reasonable summer”.

The Irish airline forecast a loss of between 850 and 950 million euros in its current financial year, which ends on March 31, around 5 times larger than its previous record annual loss posted in 2009.

“COVID-19 continues to wreak havoc across the industry,” Chief Executive Michael O’Leary said in a statement. “FY21 will continue to be the most challenging year in Ryanair’s 35 year history.”

But he said he expected the recovery to accelerate between July and September, the second quarter of the airline’s financial year, before returning to 70% and 90% of normal levels between October and March.

“We are hopeful that moving into peak summer, we’re going to see the lockdowns relaxing … and there is huge pent-up demand out there. I think it could be a reasonable summer,” Chief Financial Officer Neil Sorahan said.

In the winter, “we hope to be getting back to some kind of normality,” he added.

COVID-19 restrictions slashed Ryanair passenger numbers by 78% in the last three months of the year, the third quarter of its financial calendar, pushing it to a quarterly loss of 306 million euros ($371.06 million). That compares with a loss of 300 million euro forecast in a company poll of analysts.

Ryanair’s 82% fall in revenue in the quarter compared with falls of 88% at rival easyJet and 77% at Wizz, which both reported results last week.

Ryanair is widely seen as one of the best-placed airlines in the world to weather the COVID-19 crisis due to its large cash balance and lack of long-haul and business-class.

“The ‘in-line’ Q3’21 and the strong cash balance sheet of the company may be enough today to buoy investor sentiments after the volatility of last week,” Citi analyst Mark Manduca said in a note.

The airline reaffirmed its forecast it would fly between 26 million and 30 million passengers in the year to end-March compared with 149 million in its previous financial year. But it warned there was “more risk towards the lower end of the range.”

Ryanair in December ordered an additional 75 Boeing 737 MAX jets in what was the largest order since the plane was grounded in early 2019 following two fatal crashes. The jet was cleared in January to resume flying in the European Union.

Ryanair said it expects to have taken delivery of at least 24 of the 210 it has on order in time for its peak summer season, down from an earlier forecast of up to 30, which it said was due to the timing of its approval.