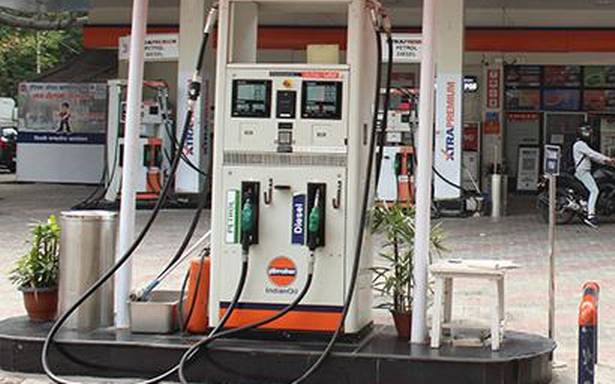 Petrol price was hiked by 25 paise a litre and diesel by 30 paise, according to a price notification of state-owned fuel retailers

Petrol and diesel prices on Tuesday surged to all-time high levels as rates were increased again after international oil prices hit the highest mark since 2014.

Petrol price was hiked by 25 paise a litre and diesel by 30 paise, according to a price notification of state-owned fuel retailers.

Prices differ from State to State depending on the incidence of local taxes.

The sixth increase in fuel rates in a week’s time has sent petrol prices above ₹100 in most major cities of the country.

Similarly, the ninth increase in prices in less than two weeks has shot up diesel rates above ₹100 mark in several cities in Madhya Pradesh, Rajasthan, Odisha, Andhra Pradesh and Telangana.

International oil prices rallied to a near seven-year high following a decision by OPEC+ to maintain its planned gradual increase of supply, despite the market facing an energy crunch.

Global benchmark Brent jumped to $81.51 per barrel, while West Texas Intermediate rose to $77.76 a barrel.

Being a net importer of oil, India prices petrol and diesel at rates equivalent to international prices.

A month ago, Brent was less than $72 per barrel.

With international crude oil prices moving in both directions during July and August, no price increase was carried out by oil marketing companies (OMCs) from July 18 to September 23. Instead, petrol price was cut by ₹0.65 a litre and diesel by ₹1.25.

However, with no respite from surging international prices, OMCs have started to increase the retail selling price of petrol and diesel with effect from September 28 and September 24 respectively.

Since then, rates have gone up by ₹2.45 paise per litre and petrol price has increased by ₹1.50.

Prior to the July/August price cuts, the petrol price was increased by ₹11.44 a litre between May 4 and July 17. Diesel rate had gone up by ₹9.14 during this period.

The relentless increase in fuel prices has been criticised by opposition parties who have demanded that the government cut record excise duty on the two fuels to give relief to consumers.

The government has so far not agreed to the demand.

Asked about the fuel prices at his ministry’s event in the national capital on Saturday, Mr. Puri said, "chodo (please leave it)" before walking away.