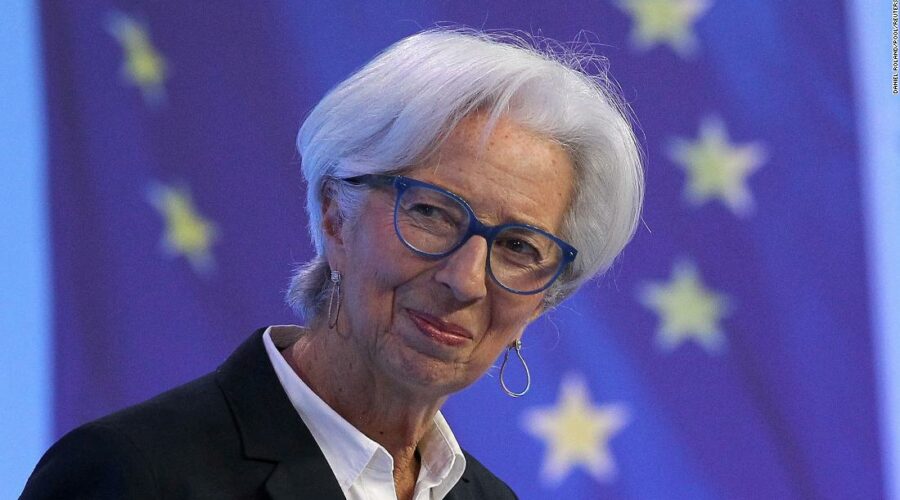 London (CNN Business)The European Central Bank is about to raise interest rates for the first time in 11 years as it attempts to put a lid on record inflation fed by surging energy prices.

What’s happening: The ECB has made clear that it will hike rates at its meeting on Thursday for the first time in 4,032 days. The only question is the size of the increase, which could be as high as half a percentage point.
Strategists think the central bank is likely to stick to a smaller increase of a quarter of a percentage point, betting that the ECB will be hesitant to contradict the past guidance it handed markets.

But they also worry that a smaller rate hike could be a mistake. Annual inflation in the European Union jumped to 9.6% in June. It reached 8.6% for the 19 countries that use the euro.

“The risk of a [half point] hike has grown materially and is almost a coin toss,” said James Rossiter, head of global macro strategy at TD Securities. “It is the sensible outcome to the meeting, but goes against recent communications.”

The challenge facing the ECB isn’t just the rate of inflation. It’s also that the central bank is pacing far behind its peers. Interest rates are still in negative territory, which critics say is making the run-up in prices even worse.
After cutting rates to zero at the beginning of the pandemic, the Fed has been on a rate-hiking spree since March, raising its benchmark rate in huge increments over the past few months to combat runaway inflation. Only the Bank of Japan — which on Thursday maintained its super-easy policies — hasn’t budged.

But the ECB is grappling with an even tougher set of circumstances than other central banks.
Surging energy prices in Europe, exacerbated by Russia’s invasion of Ukraine, are the biggest contributor to rampant inflation. Yet what happens on that front is completely out of the ECB’s control.
Russia’s Gazprom resumed gas shipments along the crucial Nord Stream 1 pipeline on Thursday, easing fears that it wouldn’t come back online after a period of scheduled maintenance.
Anxiety lingers that Russia could shut off gas at some point in the future in retaliation for sanctions, however. European natural gas prices fell back but remain elevated after hitting their highest level since March earlier this month.
Italy, Europe’s third biggest economy, is also in the throes of a political crisis that’s rattling the country’s stock and bond markets.
Italian Prime Minister Mario Draghi, an investor favorite, submitted his resignation to the president on Thursday after losing the support of several key parties in his governing coalition. That could lead to early elections.
The ECB is expected to unveil a new tool aimed at calming bond markets in more vulnerable countries in the euro zone such as Italy. It will need to pick its words carefully, though, since it wants to be viewed as staying above the political fray.
Looking ahead: Recession risks in Europe are rising sharply. That could constrain the ECB’s ability to keep hiking interest rates, which help combat inflation but also slow down the economy. The central bank may not have much room to run before it’s forced to change course.
“Everything that’s happening right now is limiting the scope for the ECB to really hike a lot,” Carsten Brzeski, global head of macro at ING, told me.

Tesla’s winning streak of record earnings has come to an end.
The latest: Lockdowns caused by the Covid-19 surge in China caused sales and profits to fall quarter-over-quarter. Tesla (TSLA) reported adjusted income of $2.6 billion in the second quarter, down from the $3.7 billion in the first quarter, but $1 billion more than it earned a year earlier.
Revenue of $16.9 billion in the quarter fell 10% from the first quarter, but was up 42% from a year ago.
Earnings were better than Wall Street’s forecasts, while revenue was slightly below expectations. Shares are up 3% in premarket trading.
Breaking it down: The company’s factory in Shanghai had to halt production for most of the quarter due to mandatory lockdowns in the city. Restrictions across China also brought sales in the world’s largest car market to a near halt and disrupted the flow of parts from suppliers.
Tesla opened a factory in Texas early in the quarter and another in Germany in late March. But supply chain problems hindered efforts to ramp up production. CEO Elon Musk predicted that the Austin and Berlin plants would be able to churn out 5,000 cars a week by early next year at the latest.
The crypto question: Remember when Tesla disclosed that it had bought up $1.5 billion in bitcoin in February 2021? It’s now paring back its exposure.
The company has sold 75% of its bitcoin holdings, which it said added $936 million in cash to its balance sheet. Musk said the sale was made to raise money to help deal with the shutdown of the Shanghai plant — and isn’t a sign the automaker is changing its view on crypto.
“We are certainly open to increasing our bitcoin holdings in future, so this should not be taken as some verdict on bitcoin,” he said.

What happened to safe haven investments?

Investors searching for safe havens during the worst inflation in more than 40 years are out of luck.
As markets stumble on fears that the economy is heading toward a recession, individual investors are searching for higher ground to protect their wealth.
Several traditional hedges against inflation have worked well in the past: gold, real estate investment trusts and US government bonds that offset the effects of inflation, known as TIPS. More recently, crypto was added to the list.
This time around, investors are hitting a snag, my CNN Business colleague Nicole Goodkind reports. Since the beginning of June, all of these popular hedges have lost money. Benchmark gold, silver, indexes that track REITs and TIPS — as well as bitcoin — are down.
Part of the problem is that inflation is running high globally, which limits places to shelter. Another issue is the strength of the US dollar. That hurts the value of commodities like gold, since they become more expensive for foreign investors to scoop up. Crypto, meanwhile, has seen a speculative bubble burst, sending prices down to Earth.
Returns on TIPS are dropping because they react to where inflation is expected to go in coming years — not what’s playing out right now. Investors still believe the Federal Reserve will be able to get a handle on inflation by hiking rates, reducing bets that prices will keep rising at such a rapid clip down the line.
“Markets are always going to price on what they think is going to happen over an extended period of time,” said Tom Graff, head of investments at Facet Wealth. “They’re not foolish: Inflation is spiking at the moment but it’s probably not going to continue forever.”