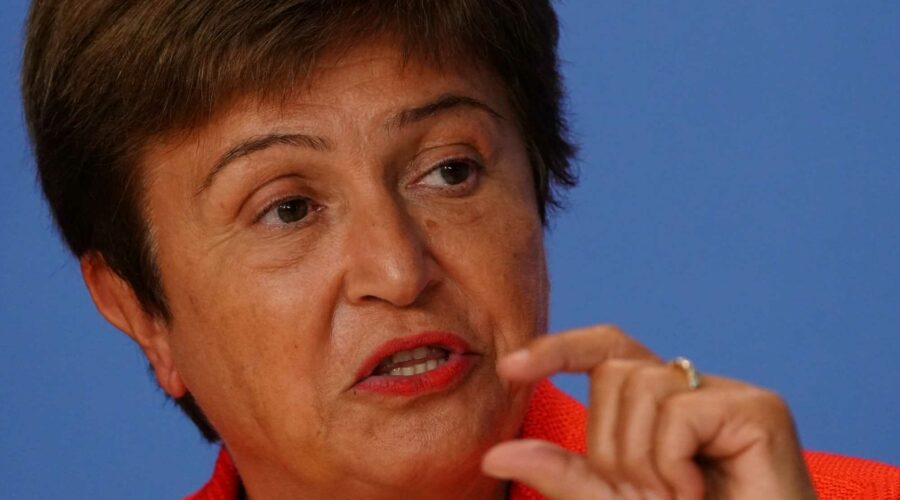 BRUSSELS — The International Monetary Fund could be about to cut growth forecasts for the euro area as concerns over the omicron Covid variant and persistently higher inflation grow.

The Fund said in October that it expected the euro zone economy to grow by 4.3% in 2022. Now, the institution has warned about the "possibility of modest revisions" when it presents new estimates next month.

"We may have a very modest downgrade in the cards for the euro zone," IMF Managing Director Kristalina Georgieva told CNBC on Monday.

Growing supply pressures, high energy prices and the reintroduction of new social restrictions in some euro area countries are among the top concerns for the Fund. It comes as the newly identified omicron Covid variant is reported in an increasing number of countries around the world.

The pandemic remains the number one risk to economic growth, according to the IMF.

"We have been screaming from the top of a mountain that [the] pandemic is the greatest risk to global economy. And we have been advocating very strongly to vaccinate the world. Progress is made, not enough," Georgieva said.

In light of surging Covid cases and the new variant, a number of euro area countries have imposed social restrictions targeting the unvaccinated. Germany and Austria, for example, imposed lockdowns for those who have not yet been vaccinated and Greece announced fines for those aged 60 and over who have not been inoculated.

These measures, the governments argue, are an attempt to protect the countries' health systems. In practice, these steps also prevent a full shutdown — and the accompanying economic ramifications.

When asked if targeting the unvaccinated was the best approach to prevent economic damage, Georgieva said: "What we see is definitely [a] correlation between [the] level of vaccinations and speed of recovery. So in this sense, we do support priority on vaccinations. The only message we have is vaccinate everybody, everywhere."

In addition to the pandemic, there are also concerns about whether higher inflation is here to stay. Euro zone inflation hit its highest level ever in November, according to preliminary data.

The Fund said last week that the U.S. Federal Reserve should speed up its tightening of monetary policy given higher inflation readings. However, its message for the European Central Bank is slightly different.

"Simply the conditions are not there," Georgieva said. "We expect, in 2022, [euro area] inflation to weaken below 2%. So, unless something changes and … we may have the Chinese economy shrinking or real estate market undoing … If that happens, the ECB has the tools to respond, but short of these wage pressures or other factors, [the] ECB is right to be accommodative."

According to IMF's projections, euro zone inflation is projected to decline through 2022 and to remain below the ECB's 2% target in the medium term.

Nonetheless, the IMF said wage negotiations were an area to watch. It said in a report on Monday that "upcoming wage negotiations, which are expected to be more frequent than in previous years after many contract renewals were put on hold during the pandemic, will need close monitoring."

Wage growth is a key component of the impact of inflation on households, as if wages grow below inflation, consumers will have less purchasing power which could influence the rate at which central banks tighten.

Market players are anxiously awaiting the outcome of an ECB meeting next week to understand how the central bank intends to square the news of the omicron Covid variant and higher inflation pressures.

This comes after the Fed said last week it could taper at a faster pace than previously expected. In contrast, the Chinese central bank announced Monday a cut to its reserve requirement ratio (the amount of reserves a bank must hold), in an effort to boost liquidity in the economy.

The IMF announced Friday that it will be looking at its research processes in order to ensure data integrity. The announcement comes about two months after a data rigging scandal emerged at the World Bank that covered the period in which Georgieva was the institution's CEO.

When asked if the review process at the IMF was an attempt to clean the reputation of the IMF, Georgieva said "we have a great reputation."