Kenneth Fisher, a billionaire money manager, was known on Wall Street for aggressively marketing his firm and attaching his name to books, columns and TV ads.

His marketing acumen has helped build his investment firm into a significant player in the world of money management, managing more than $US112 billion ($163 billion) of investors' money, up from $US33 billion a decade ago.

But now, Fisher has lost control of his media narrative, as he gets skewered over sexist and lewd remarks he made this month at a financial services industry conference in San Francisco. Fisher was slow to acknowledge that he had said anything wrong when he crudely compared the wooing of wealthy clients to trying to pick up a woman at a bar.

The firestorm has renewed attention on past crude comments, as well as his criticism of President Abraham Lincoln for fighting the South over slavery. 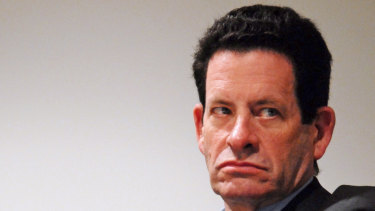 The damage has been quick and costly. In the past two weeks, public pensions and institutional investors like Fidelity have pulled nearly $US2 billion from his privately held firm, Fisher Investments, which is based near Portland, Oregon, and has 3,500 employees.

The list of state and municipal retirement funds that have said they are severing ties with Fisher's firm includes ones from Michigan, Iowa and most recently a fund in New Hampshire. The three state pension funds alone have pulled roughly $US1.2 billion from the firm.

"The sense was, essentially, there was no upside in staying with him," Marty Karlon, a spokesman for the New Hampshire Retirement System, said on Tuesday. He added: "We don't support the comments in any way."

Other public pensions are putting Fisher's firm on a watch list for potential action.

A column Fisher writes in the USA Today even might be in jeopardy. "Ken Fisher's column is on hold pending review," said Chrissy Terrell, director of corporate communications for USA Today Network.

'Trying to get into a girls' pants'

The backlash is an example of the repercussions executives face in a business world that no longer tolerates disparaging comments.

"In his mind, he probably just doesn't mean any harm. He literally doesn't get it," said Denise Shull, a former trader at the Chicago Mercantile Exchange who now serves as a performance coach to Wall Street money managers and corporate executives. "If he were my client, I would walk him through why he says these things and ask him what is he trying to accomplish."

The furor in the financial world began almost immediately after Fisher spoke at an October 8 conference sponsored by Tiburon Strategic Advisors, where, according to Bloomberg News, he said getting new clients was akin to “trying to get into a girl’s pants.”

Fisher's initial response was to brush off the criticism. In an interview with Bloomberg the next day, he remarked that he had "said stuff like this" before and it had never caused a stir. But as the controversy grew, Fisher was forced to issue an apology, in which he said, "I realise this kind of language has no place in our company or industry."

In a separate statement to clients and employees, Damian Ornani, Fisher Investments' chief executive, said the firm valued diversity and was putting together a "diversity and inclusion task force." The letter, obtained by The New York Times, did not address Fisher's comments directly but referred to them as having "created an unnecessary distraction."

'One of the worst presidents'

Over the years, Fisher has not been shy about making statements that have drawn scorn.

At a Reuters investment summit in December 2011, Fisher said entrepreneurs had contributed more to the country than any politician, and he went on to rank Lincoln as one of the worst presidents. Fisher said that Lincoln had chosen war over negotiations with the slaveholding states in the South.

Just last year, Fisher offered up similar statements about Lincoln and slavery on Twitter. Forbes uncovered posts on Twitter in which Fisher said that Lincoln was his least favourite president and that everyone in the country, including African Americans, would have been better off if slavery had been allowed to end "peacefully".

And CNBC obtained an audiotape of a 2018 conference in which Fisher compared selling a mutual fund to asking a woman in a bar for sex.

Fisher took an unconventional path to the upper echelons of the money management world. A native of San Francisco, he never worked at a traditional Wall Street firm and began his career in the private investment firm owned by his father, Philip A. Fisher, a well-known investor and author.

By 1979, Kenneth Fisher struck out on his own, forming his own investment firm. He penned his first book, "Super Stocks," in 1984 and has written 10 more since.

The key to Fisher's success has been advertising and employing an army of salespeople to cold call investors, often relying on leads generated from internet responses. In a lawsuit 15 years ago, lawyers for Fisher said he had developed a marketing system that was "unique among asset management firms." At that time, Fisher's firm estimated it spent $US14,000 to attract each of its customers.

Last year, Fisher Investments spent just over $US68 million on advertising, and the firm ranks as the 12th-biggest ad spender in America's financial services industry, according to Kantar, a data and consulting firm.

All that spending has attracted a robust client base for Fisher's firm, which manages about $US60 billion for more than 65,000 individual investors — the bulk of its clients. Before the furor erupted, public pensions and state and municipal governments accounted for roughly $US11 billion of the firm's assets.

He probably just doesn't mean any harm. He literally doesn't get it. If he were my client, I would walk him through why he says these things and ask him what is he trying to accomplish.

Fisher Investments has for several years been a client of Callan, a consulting firm that advises pensions and institutional investors about selecting money managers. A spokeswoman for Callan declined to discuss its relationship with Fisher Investments and its consulting work.

But NEPC, another influential pension consultant, issued a letter on Thursday recommending that its clients terminate holdings with Fisher Investments, saying Fisher's behaviour, his response to criticism and the subsequent prominent redemptions "lead us to question the sustainability of the firm."

Fisher and his firm make most of their money from fees charged to clients, which can range from 0.5 per cent to 1.5 per cent.

Fisher invests client money in a variety of stock strategies that include investments in small-cap, emerging-market and so-called frontier market stocks.

It is hard to gauge the performance of those investments because the firm does not focus on traditional mutual funds. But some past Fisher funds with publicly available numbers have underperformed the market substantially.

The Purisima Total Return Fund, a mutual fund that Fisher managed, had a return of almost 25 per cent in the 10 years before its liquidation in 2016, according to Bloomberg data. Yet over the same period, investments in the Wall Street's benchmark index S&P 500 would have doubled

24/10/2019 Markets Comments Off on Kenneth Fisher ruled investing. Then he made a sexist joke.
World News