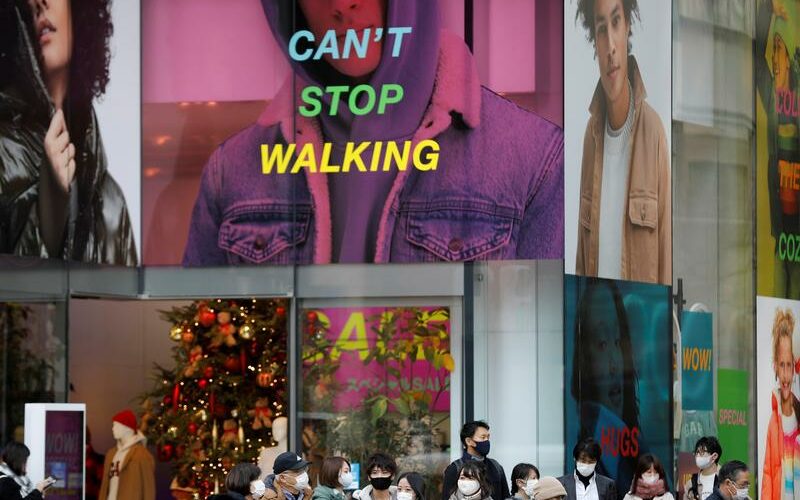 TOKYO (Reuters) – Japanese retail sales rose at the fastest pace in five months in March as consumer demand recovered from the huge hit it took from the coronavirus pandemic last year.

The world’s third-largest economy has emerged from last year’s slump on an export recovery, though a glacial vaccine rollout and a resurgence in infections are threatening household demand.

Retail sales jumped 5.2% in March from a year earlier, government data showed on Wednesday, a larger gain than the median market forecast for a 4.7% rise.

That marked the fastest rise since a 6.4% advance in October and the first positive growth in four months.

“They were going out to shopping streets and commercial facilities, leading to more consumption.”

Compared with the previous month, retail sales rose 1.2% on a seasonally adjusted basis.

The broader rise in retail sales was driven by higher spending on fashion items such as clothing and accessories as well as general merchandise.

Wednesday’s data also showed department store sales posted a 19.3% jump, in contrast to a 2.1% drop in supermarket sales, their the second month of declines.

Retail spending returned to pre-pandemic levels in the fourth quarter of 2020 as the economy recovered from the coronavirus induced slump.

However, spending subsequently eased amid COVID restrictions in the first quarter while new state of emergency declarations last week are expected to weigh on consumption in the immediate-term.

In March last year, retail sales plunged after the health crisis forced shops including department stores to shut their doors, causing demand for household appliances, clothing and other items to tumble.

Analysts now remain especially worried about a hit to spending on services, such as restaurants and leisure activities, after Japan last week declared a third state of emergency for Tokyo and other prefectures to contain the pandemic.

Department stores in the affected prefectures shut their doors as part of those curbs, a move that is likely to depress consumer spending again.

“Services spending accounts for about half of consumption. If it won’t be going on an uptrend, overall consumption will stagnate,” said Minami.