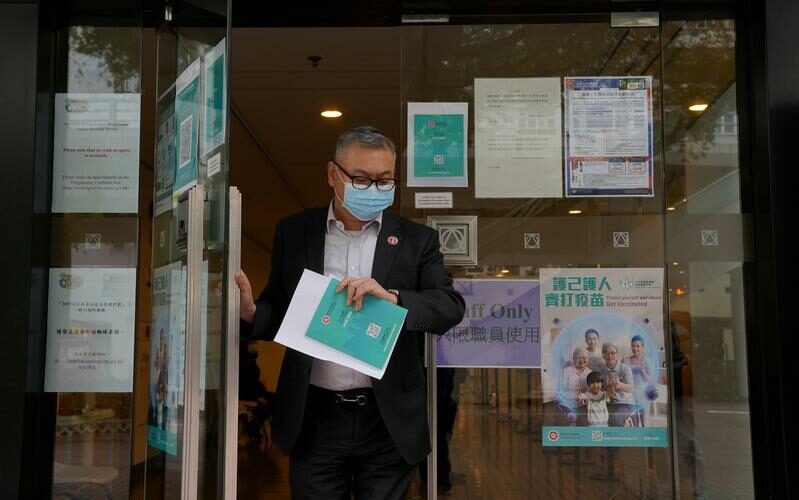 HONG KONG (Reuters) – Hong Kong will loosen some coronavirus measures for residents who have been fully inoculated from late April, the city’s leader Carrie Lam said on Monday, as authorities seek to boost the take-up of vaccines in the global financial hub.

Bars and pubs, which are currently shut, would be allowed to resume operations in phases provided all staff and customers had been vaccinated, she said. Visitation to public hospitals and care homes could also be permitted for vaccinated people.

Lam, who was speaking at a press conference on Monday, said the government was discussing further details and aimed to loosen measures from April 29. Only residents who receive both doses of their COVID-19 shot would be eligible. Take-up has been sluggish since the vaccination programme began in the Chinese special administrative region in February due lacklustre confidence in China’s Sinovac vaccine and fears of adverse reactions. Only around 8% of the city’s 7.5 million population have been inoculated so far.

“We would like to see the vaccination rate go up, at the moment it is not satisfactory,” Lam said. Quarantine periods for fully vaccinated people arriving from low-risk countries like Australia, Singapore and New Zealand could be reduced to 7 days from 14 days and to 14 from 21 days for arrivals from medium-risk countries. She said it was not clear yet when the relaxation of such quarantine measures would take place.

Hong Kong began vaccinating residents with doses from Sinovac in February and started offering a vaccine developed by BioNTech in March.

The BioNTech shot has seen a far greater take-up since its launch, with two to three times more people booking inoculation with that shot on a daily basis than for Sinovac, according to government figures. Residents of Hong Kong can choose which vaccine they take. Several deaths after vaccinations have also spooked some residents although the government has said there is no direct link established between the vaccine and the deaths. The former British colony has recorded more than 11,500 total coronavirus cases, far lower than other developed cities.