Prime Minister Scott Morrison and his predecessor Malcolm Turnbull have both stepped up pressure on the Westpac board to take responsibility for the alleged 23 million breaches of anti-money laundering and counter-terrorism finance laws, which prompted regulators to take legal action against the bank this week.

Refusing to comment on whether CEO Brian Hartzer should step down, the Prime Minister said: "there has to be some understanding of accountability for when these things happen". 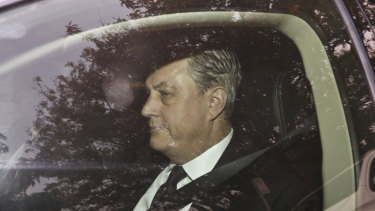 AUSTRAC accused Westpac in the Federal Court this week of breaching Australia’s anti-money laundering and counter-terrorism financing laws 23 million times, including failing to properly vet thousands of transactions that could be linked to child exploitation and live child sex shows in the Philippines and other parts of south-east Asia.

Breaches of this kind … are of the highest gravity.

Westpac's directors convened on Friday morning to "get the facts straight" following the explosive statement of claim by the financial intelligence agency AUSTRAC that has cast doubt over the future of CEO Hartzer.

Company sources told The Sydney Morning Herald and The Age there had not been an official agenda for the meeting, but said "anything and everything" was on the table as the bank works through its response to the unfolding crisis.

The purpose of Friday's meeting was to get "the facts" about who knew what and discuss the consequences moving forward, a source said.

There is a sentiment within Westpac that the bank has been unfairly treated by AUSTRAC, with senior figures privately claiming the company had worked collaboratively with the regulator over the past two years.

The regulator said this week there had been “systemic failures in [the bank's] control environment, indifference by senior management and inadequate oversight by the board”.

While he wouldn't drawn into making statements about Mr Hartzer's future as CEO, the Prime Minister said the job of the board was to oversee compliance with the law.

"They’ve got to take the calls that reassure people's confidence in the bank's systems and the processes they have and that there is accountability that is at work in these institutions," Mr Morrison said.

The Prime Minister said that "of course" confidence in the banking system was damaged by the latest scandal to plague the major bank.

"We have the best banking system in the world, let me stress that … but clearly there are failings in these systems and they need to be fixed and boards need to take accountability for that, for their shareholders and their customers and the public at large," he said.

Vas Kolesnikoff, researcher at shareholder advisory service ISS, said on ABC radio on Friday morning it was the board's job to monitor management.

"We've got 23 million breaches of basic compliances, you'd like to say what was management doing? If management wasn't doing enough, we have a board here and we need to know what were they doing?"

Meanwhile, a spokesman for the Australian Federal Police confirmed it had received a referral from AUSTRAC.

"The Australian Federal Police (AFP) can confirm it has been working with AUSTRAC and is aware of the individuals identified suspected of suspicious transactions which may relate to child sex offences.

"The AFP is currently assessing the matter, and as such it would not be appropriate to comment further at this stage."

Police sources confirmed no arrests or charges had been laid as a result of the AUSTRAC referral.