These five major US cities are high-tech job magnets

Technology jobs and the vibrant economy they accompany have been concentrated in just five U.S. metropolitan areas, according to a report.

Boston, San Francisco, Seattle, San Diego and San Jose, California accounted for more than 90 percent of the growth in high-tech jobs between 2005 and 2017, boosting the nation’s total innovation employment from 17.6 percent to 22.8 percent, according to a new report from the Brookings Institution.

US CITIES WITH THE MOST EXPENSIVE COMMUTE

The report also said that during that same period, the bottom 343 other metro areas lost one-third of the nation’s innovation jobs. 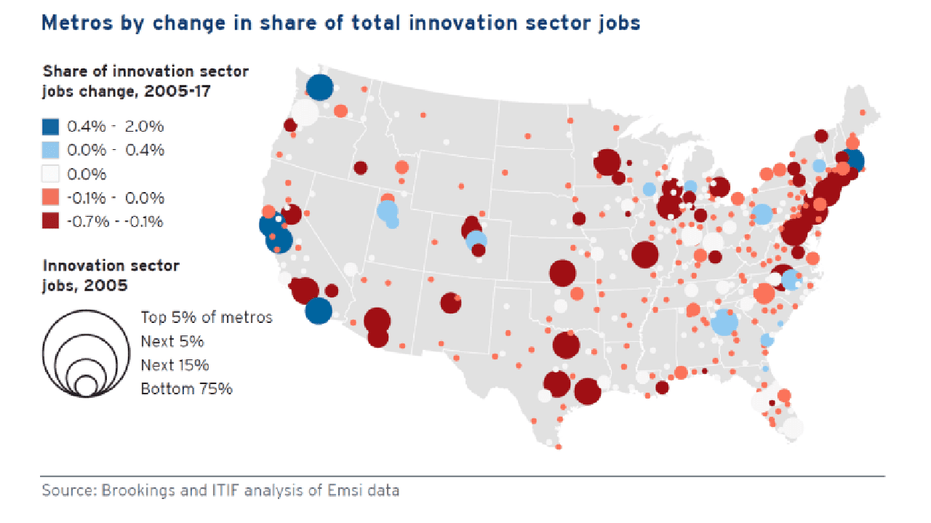 Many high-tech cities are experiencing negative consequences, including soaring home prices, traffic jams and college-educated people flocking to the popular cities, the report said. As a result, parts of the country could be falling into “traps” of underdevelopment. San Francisco and San Diego, for example, are tackling a dire homeless crisis.

INSIDE LOS ANGELES' SKID ROW, THE EPICENTER OF THE HOMELESS CRISIS

The report also found 35 metro areas that could potentially become one of America’s next hubs for innovation – especially in the Great Lakes, Upper South and Intermountain West regions.