The country’s largest ethical super fund says the opportunity for investors to profit from ‘green shorting’ will grow as global leaders take greater action on climate change, which could act as a catalyst for sliding sharemarket valuations for fossil fuel producers.

The Age and The Sydney Morning Herald reported this week US hedge fund AQR told the prudential regulator a number of its Australian clients, which include large super funds, are interested in exploring new ways to reduce carbon emissions from their investment portfolios, with short selling carbon-heavy stocks an emerging strategy. 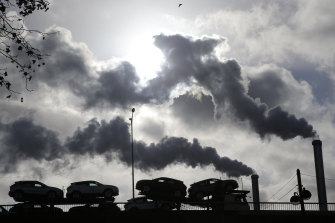 An international carbon tax could be a ‘catalyst’ for green short sellers to profit, according to Australian Ethical’s Stuart Palmer. Credit:AP

ASX-listed Australian Ethical’s head of research Stuart Palmer said the $4 billion fund does not currently use so-called ‘green shorting’, but the strategy was widely discussed within the impact investment community.

“With shorting you’re looking for the asset value to fall within a shorter time frame, so the question is, what is the catalyst for that?” Mr Palmer said. “That’s where it’s interesting in the climate space because there are so many catalysts.”

Australia’s largest trading partners China, the UK and South Korea have introduced net zero emissions targets in recent years, while the European Union and US are edging closer to enforcing a cross-border carbon tax to penalise countries with poor records on climate.

Mr Palmer said these geopolitical shifts exposed Australia’s heavy emitters to rising risks, and predicted valuations of pure-play fossil fuel producers could slide even before a carbon price is introduced on their exports.

“People fall into the trap of thinking ‘well a carbon price isn’t going to get legislated tomorrow or next month’,” he said. “But markets react to changing sentiment about the expectation of a carbon price.

“If people start thinking ‘I can see a significant carbon price in the next few years’, that completely changes the way they value these projects and existing assets of these companies,” he said. “It doesn’t need to be implemented for tomorrow for the market sentiment to shift, and for that to have a massive impact.”

Legislation introduced by the federal government this year tightened the superannuation sector’s legal obligations to ensure all investments result in financial benefits for members. Short selling is a trading strategy that aims to profit from the fall in the price of a security. An investor borrows shares and sells them, with the aim of buying them back later at a lower price to make a profit. Mr Palmer said super funds would need to thoroughly stress test green shorting before using it, as there was no limit on potential losses if the share price rises.

“When you talk about shorting, it’s hard not to think about how it can go wrong from a financial point of view,” he said. “But I think it follows there is pretty direct alignment with the divestment fossil fuel campaign, which focuses on stranded assets, and companies and sectors which aren’t transitioning in line with [the] net zero by 2050 target.”

Future Super chief executive Simon Sheikh said the activist fund had investigated green shorting in recent years but had no immediate plans to take up the strategy. Mr Sheikh said potentially rising red tape for short sellers, combined with few local asset managers who are specialised in the strategy, meant the tactic would likely take off in the US before Australia.

“This is an opportunity for the next few years, not the last few,” he said. “If it becomes a reality for any super funds in Australia, it will be when the managers are there and the market dynamics are right.”

Mr Sheikh added green shorting was best executed when paired with long-term investments in listed “companies of tomorrow”, but he said there were “no clear winners” at this stage. “We don’t have maturity of market. We don’t have listed companies in the ASX who are the clear winners in the transition.”

However, Mr Sheikh said it’s an investment strategy his $1.5 billion fund will consider introducing once it was more developed.

“Typically a company will take its short sellers very seriously,” he said. “The power of short selling can be very significant.”