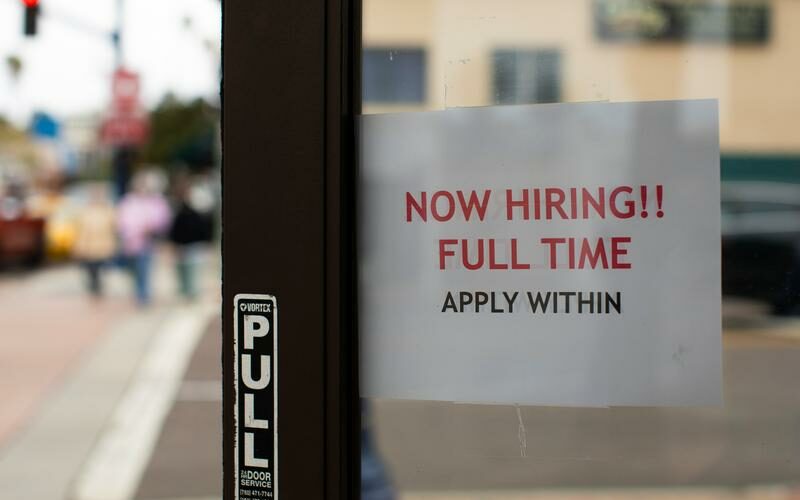 A retail store advertising a full time job on its open door in Oceanside, California, U.S., May 10, 2021. REUTERS/Mike Blake

The United States added 266,000 jobs last month, about a quarter of the gain penciled in by economists, including Fed officials themselves, in what had been anticipated to be the start of a steady run of strong job growth.

The April report instead raised a broad set of questions about the complicated interplay among peoples’ decisions about whether to work during the ongoing coronavirus pandemic, constraints stemming from the lack of child care and closed schools, the slowing pace of COVID-19 vaccinations, global supply bottlenecks for critical goods like semiconductors, and the enhanced federal unemployment benefits that may be encouraging some potential workers to stay home.

In contrast to the low number of jobs created in April, job openings as of the end of March hit a record 8.1 million, narrowing the wedge with the roughly 9.8 million people still unemployed.

“What the data suggests, and what I hear anecdotally, is that labor demand and labor supply are both on the path to recovery but they are recovering at different paces and there may be friction,” Fed Governor Lael Brainard told the Society for Advancing Business Writing and Editing (SABEW).

“There are still concerns over contracting the virus, the need to take public transportation,” she said, while many parents are waiting for schools to reopen.

“I do expect to see good improvement on people wanting to go to work and able to work,” Brainard added. “We are just seeing it in fits and starts,” a fact she said validated the U.S. central bank’s “patient” promise to leave crisis-level interest rates and bond-buying in place until the recovery is more complete.

In separate appearances, Cleveland Fed President Loretta Mester, Philadelphia Fed President Patrick Harker, and San Francisco Fed President Mary Daly laid out similar arguments, and noted that much may hinge on whether larger numbers of Americans get vaccinated so that people overall become more comfortable in close-contact jobs and activities.

The April jobs report has kindled intense debate in Washington about where the recovery stands and whether current federal policy is stifling aspects of it.

The economy is poised for its strongest growth since the early 1980s, jobs boards are bulging with open positions, and the number of new daily coronavirus infections has recently ebbed to levels not seen since the start of the pandemic.

Businesses, even the smaller enterprises that had to be nursed through the pandemic with federal help, now complain those same benefits are allowing workers to stay home.

Brainard, however, noted that about two-thirds of school-age kids were still not back in classrooms on a full-time basis, while only about a quarter of those aged 18 to 64 – the core of the U.S. work force – are fully vaccinated.

The decision by the Biden administration and Congress earlier this year to extend a weekly $300 federal unemployment benefit until September has become a particular point of contention, with Republican governors in several states moving to halt the payments.

Fed officials, however, have largely discounted the impact of the extra payments on workers’ willingness to seek jobs, arguing that it isn’t the benefit as much as health risks and other problems that are at play. At the start of the pandemic, federal benefits were put in place largely so people would not have to venture out to jobs that might expose them to illness and allow them to spread it further.

“It is true that with the extension of the unemployment benefits people are in a financial position so that they can make those hard choices, about whether they feel comfortable reentering or not,” Mester said on Yahoo Finance.

The pace of the labor market rebound has a direct bearing on how the Fed intends to set monetary policy.

In particular, the Fed has said it would not change its current $120 billion in monthly purchases of government securities until there was “substantial further progress” in reaching maximum employment.

Slower job growth pushes that moment further into the future even as concerns increase that the continuing loose monetary policy may fuel inflation, or drive up asset prices that will eventually return to earth.

New consumer price data this week is expected to stoke that debate as prices for staple goods and commodities like lumber for home projects move higher.

Fed officials, however, say they expect the pressure on prices to also ease over time, just as the difficulties in the labor market will be resolved.

“To the extent that supply chain congestion and other reopening frictions are transitory, they are unlikely to generate persistently higher inflation on their own,” Brainard said, noting that some of the very forces that might generate higher prices now – a surge in demand as people get back to normal activity, for example – won’t be repeated.

Government fiscal spending is also expected to fade next year.

“Remaining patient through the transitory surge associated with reopening will help ensure that the underlying economic momentum that will be needed to reach our goals as some current tailwinds shift to headwinds is not curtailed by a premature tightening of financial conditions,” she said.