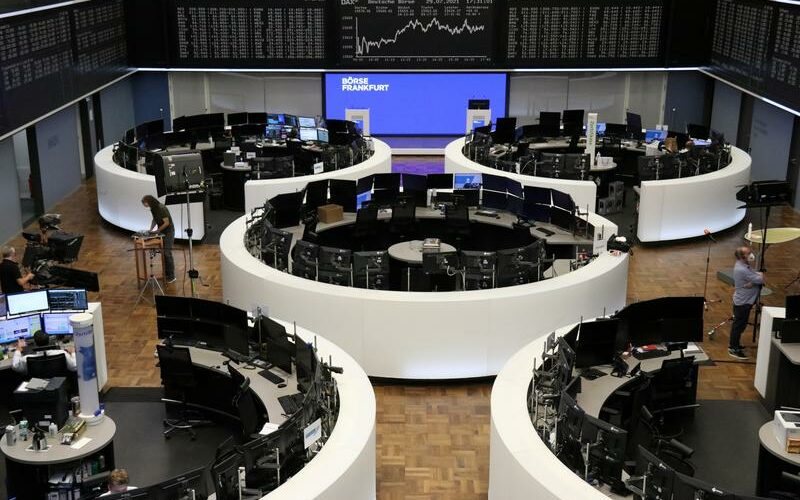 (Reuters) -European stocks fell from record highs on Friday as concerns about the fast-spreading Delta variant and regulatory actions in China outweighed optimism around quarterly earnings season and an economic recovery.

Travel and leisure stocks and miners were the top decliners in morning trading.

Still, the benchmark was on course to end July with its sixth consecutive month of gains in what could be its longest monthly winning run since 2013.

Italy’s UniCredit jumped 5.4% after it posted higher-than-expected net profit, and said late on Thursday it had embarked on formal talks with the government over the possible acquisition of rival Monte dei Paschi di Siena. Monte dei Paschi surged 7.5%.

EssilorLuxottica rose nearly 3% as the Ray-Ban maker raised its full-year guidance after revenue doubled in the second quarter.

Overall, out of half the STOXX 600 companies that have reported so far, 67% have topped analysts’ profit estimates, according to Refinitiv IBES data. While that is below the 72% beat-rate in the first quarter, it still tops the 51% rate in a typical quarter.

“We have had exceptional expectations, yet the companies have managed to beat those expectations,” said Oliver Collin, fund manager of European equities at Invesco. “Interesting thing in Europe is those beats, quite different to the U.S., were rewarded in some sort of positive share price momentum.”

The euro zone economy grew more strongly than expected in the second quarter as the bloc rebounded from a recession caused by the COVID-19 pandemic, preliminary data showed.

Gross domestic product in the region grew 2.0% quarter-on-quarter for a 13.7% year-on-year increase. Economists polled by Reuters had expected a 1.5% quarterly and a 13.2% annual increase.

British Airways-owner IAG fell 3.7% after it said summer capacity would rise to 45% of pre-pandemic levels but warned that significant uncertainty remained.

Air France-KLM was up 1.4% after it unveiled narrower losses for the second quarter but a company executive said people are still reluctant to travel.