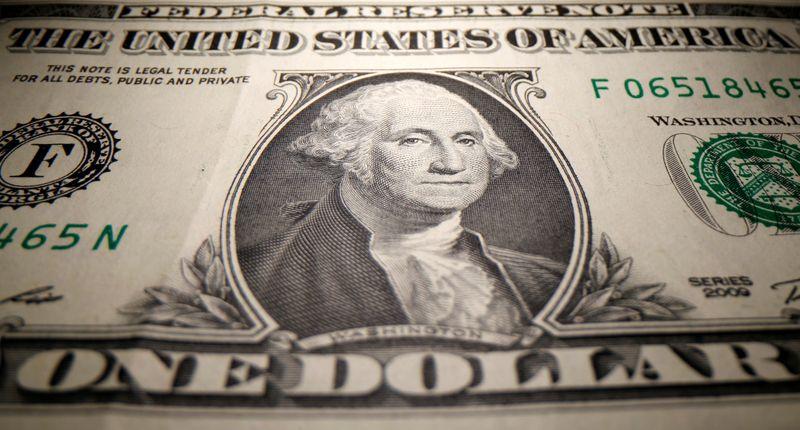 TOKYO (Reuters) – The dollar fell against major peers on Tuesday as China set the official yuan exchange rate at the strongest since abandoning its peg in 2005, which helped support demand for other units.

FILE PHOTO: A U.S. Dollar banknote is seen in this illustration taken May 26, 2020. REUTERS/Dado Ruvic/Illustration

The Australian dollar led gains in major currencies as the move by the People’s Bank of China (PBOC) encouraged broad dollar selling.

Earlier, the greenback had found support as concerns about surging COVID-19 cases and uncertainty about U.S. runoff elections in Georgia spurred a retreat in U.S. stocks from record highs to start the year and kindled demand for safer assets.

While investor caution about the yuan’s heady rally prompted some later selling in the Chinese currency on Tuesday, the PBOC’s action nonetheless lifted risk sentiment in currency markets.

“If the Chinese currency is going up, it’s providing a degree of support for Asian currencies in general, and I suspect that’s why the U.S. dollar is partially reversing the gains that we saw from Wall Street time,” said Ray Attrill, head of FX strategy at National Australia Bank in Sydney.

“It’s a very big move by any historical yardstick, and I don’t think you can ignore that.”

The PBOC set the official yuan midpoint at 6.4760 per dollar prior to the market open, 1% firmer than the previous fix, also the biggest change since 2005.

“Until the vaccines are rolled out globally, the market will continue to be driven by COVID headlines, so it’s a bit of a volatile time,” said Shinichiro Kadota, senior currency strategist at Barclays Capital in Tokyo.

“But generally positive risk sentiment should continue this year, and with that, dollar continues to weaken against riskier currencies. We expect Chinese yuan to be one of the outperformers.”

Sterling has been swung by a surge in infections of a fast-spreading new coronavirus strain in the UK, with Prime Minister Boris Johnson ordering a nationwide lockdown.