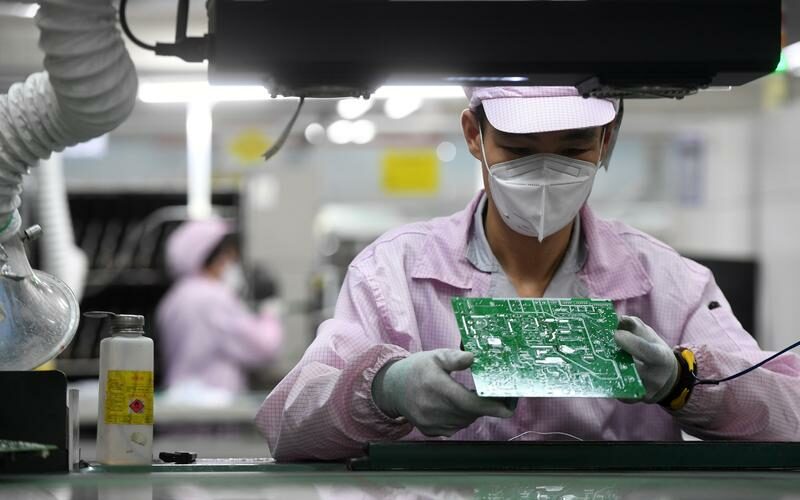 BEIJING (Reuters) -Profits at China’s industrial firms grew at a weaker pace in August from a year earlier, slowing for a sixth consecutive month, as manufacturers struggled with high commodity prices, COVID-19 outbreaks and shortages of some key components.

FILE PHOTO: An employee inspects a circuit board on the controller production line at a Gree factory, following the coronavirus disease (COVID-19) outbreak in Wuhan, Hubei province, China August 16, 2021. China Daily via REUTERS

Momentum in the world’s second-biggest economy has weakened in recent months, with its vast manufacturing sector buffeted by gathering headwinds.

Industrial production rose in August at its slackest pace since July 2020, weighed by domestic COVID-19 outbreaks, high raw material prices, a campaign by Beijing to cut carbon emissions and a persistent shortage of parts such as semiconductors.

A sustained crackdown this year on real estate speculation and new borrowing by developers for projects has also sapped demand for construction-related goods and services.

“A sustained and stable recovery in corporate profits is facing more challenges,” said Zhu Hong, senior statistician at the statistics bureau, in a statement.

“The epidemic is still spreading in some areas, overall prices of bulk commodities are high, the cost of international logistics is elevated, and the shortage of chips is pushing up corporate costs.”

To cool prices, China will auction more industrial metals from its state stockpiles next month in a rare release of inventories. Prior to this year, Beijing had not sold off state metal reserves for more than a decade.

Earlier this month, China also released crude oil from its strategic reserves for the first time.

But further dimming the outlook for manufacturers, China has tightened controls on power usage by energy-intensive firms to meet climate goals, hurting production. The power shortages have also triggered electricity cuts across regions this month, clouding the economic outlook

“We expect industrial profit growth to fall further in coming months amid a notable growth slowdown in H2 due to the recurring COVID-19 waves and Beijing’s zero-COVID strategy, likely slowing exports, and Beijing’s enforcement of property sector tightening and green measures,” Nomura analysts wrote in a note.

“We believe the slowdown could be even sharper in September due to severe power outages in many regions.”

For the January-August period, industrial firms’ profits rose 49.5% year-on-year to 5.61 trillion yuan, slowing from a 57.3% increase in the first seven months of 2021.

Liabilities at industrial firms rose 8.4% on an annual basis at end-August, up from 8.2% growth as of end-July.

The industrial profit data covers large firms with annual revenues of over 20 million yuan from their main operations.