When one of Australia’s most influential women in property switched jobs last year, it made headlines for two reasons.

It was July and Carmel Hourigan had resigned from AMP after missing out on a promotion. Rainmaker Boe Pahari was given the job, after the board determined docking his bonus by 25 per cent was sufficient punishment for sexually harassing a former colleague.

The 172-year-old company was in chaos, with investors demanding answers and politicians calling for scalps during what was dubbed corporate Australia’s #MeToo moment. 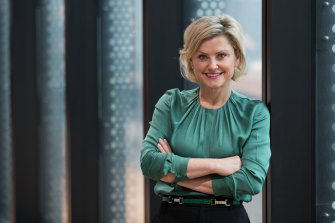 It was also the same month Melbourne entered its second lockdown as new cases exceeded 100 per day. There was no vaccine, no end in sight and city streets were dead quiet. Hourigan had accepted a job at rival firm Charter Hall to head up the office division – managing $21 billion in funds and 74 properties.

For companies like Charter Hall – that build, own and lease commercial real estate – it was a tumultuous time. Around 10 per cent of the ASX-listed property giant’s tenants were classified under the government scheme that forced landlords to negotiate fair deals with their tenants.

“I think some people said to me at the time, ‘Wow, not sure what’s going to happen to you in office’. But another person said, ‘It’s such an interesting time to take that role. You can actually define what office looks like in the future’,” Hourigan says. “I thought to myself, that’s absolutely right.”

Hourigan can’t talk about the circumstances around her departure from AMP or answer questions about the company’s culture or leadership. But she can speak generally about the experience.

“What happened at AMP Capital, some of that was really an interesting time to live through. Waking up and seeing on the front pages of the Financial Review the headlines like we saw.

“But I think it also showed from a culture point of view, maybe this is across the whole industry … there’s a certain standard that people want in terms of leadership.”

For Hourigan, real estate has always been a man’s world. From when she studied commerce at Western Sydney University in the early-1990s, she has always been one of the few women in the room.

Hourigan says key to her success has been hard work and “male sponsors”: colleagues who noticed her talent and helped open doors. She also credits her husband Justin for helping her career by becoming the primary carer of their two daughters, Sofia and Olivia – now teenagers aged 17 and 15.

‘Being a female in what was early on a very male dominated world, you sort of felt like you had to give it all: go harder.’

Hourigan’s expansive career has seen her work at a range of top firms – Lendlease, Challenger, GPT – developing skills and contacts in the worlds of funds management and property. She’s observed the growth of REITs (real estate investment trusts) and counts sourcing equity for Barangaroo while at Lendlease and the acquisition of Colonial’s diversified REIT as among her top deals.

But AMP wasn’t the first time she missed out on a promotion. Hourigan says she’s never experienced sexism first-hand but recognises the industry, and society at large, has a long way to go to achieving gender equality.

Hourigan visited the United Nations in 2019 to share insights from Australia on gender diversity in the workplace. She has become a keynote speaker on the topic and is an advisor to Property Male Champions of Change, a group dedicated to increasing women in leadership in the property sector.

If Hourigan could give advice to her younger self, it would be to slow down. When her second daughter was born, Hourigan went back to work after three months to manage an initial public offering for a listed REIT.

“That was tough. I look back now and think jeez I wish I’d spent more time at home with her.

“If I could change anything, I would have a bit more confidence on the way so I didn’t have to work so hard, that I could live with the choices I have made and be comfortable with them.”

“Being a female in what was early on a very male dominated world, you sort of felt like you had to give it all: go harder.”

But for now, Hourigan wants to focus on the task at hand. She’s been with Charter Hall for six months and the company has since revised its earnings forecasts upwards. Amazon has committed to moving into the group’s new Collins Street tower and the company’s government clients are upgrading their offices. Fear among property investors that the office is dead has “turned a corner”, she says.

As city life returns to somewhat normal and more Australians are vaccinated, albeit slowly, Hourigan says she’s enjoying the team and learning a lot. “I was really sad to leave AMP Capital at the time but it’s been the right decision for me.”

The interview takes place on the seventh floor of Charter Hall’s sparkling new building on Lonsdale Street. The lift doors open to an empty, dark room in what could be an omen for the future of offices. But Hourigan is quick to explain the room has been filled, it’s simply an expansion space for tenant, AustralianSuper. “The building is fully leased.”

Hourigan says the office is not dead, but it’s changed. Flexibility is here to stay and CEOs must innovate to lure workers back to the city. The way offices are built are changing too. Sustainable designs and amenities that enhance the employee experience are front of mind, with green spaces and exercise facilities becoming essential to new, top-shelf developments.

Sydney is ahead of Melbourne in terms of city workers’ preparedness to come back, Hourigan says, but she predicts occupancy levels will return to pre-COVID levels by September. “Humans like to be with each other, it’s quite normal.”