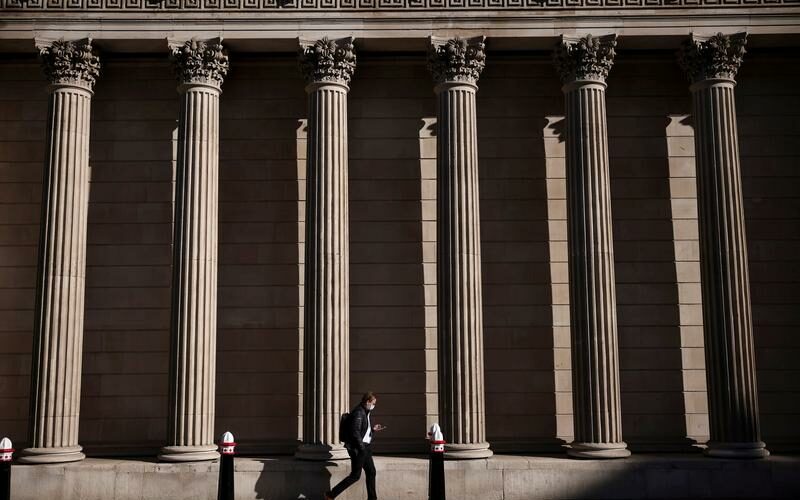 LONDON (Reuters) -The Bank of England set out its plans for how it would start to ease the British economy off the huge levels of support it has provided during the pandemic crisis, but it kept its stimulus running at full speed for now despite a jump in inflation.

The BoE kept the size of its bond-buying programme unchanged and held its benchmark interest rate at a historic low of 0.1% on Thursday, as expected.

With more than 70% of adults in Britain now fully vaccinated against COVID-19 and most social-distancing rules lifted, Britain’s economy has recouped much of its 10% crash of 2020.

Despite the pace of recovery, only one of its eight policy-makers – Michael Saunders – voted to scale back support, leaving the total size of the asset purchase programme at 895 billion pounds ($1.25 trillion).

But the BoE sent a clear message of how it plans to rein in its stimulus, when the time comes.

It said it would start reducing its stock of bonds when its policy rate reaches 0.5% by not reinvesting proceeds, if appropriate given broader economic conditions. It would then consider actively selling down holdings when the rate reaches at least 1%.

“The Committee judges that, should the economy evolve broadly in line with the central projections in the August Monetary Policy Report, some modest tightening of monetary policy over the forecast period is likely to be necessary,” the central bank said.

Previous guidance, dating back to June 2018, stated that the BoE would not start to unwind bond purchases, and would reinvest the proceeds of maturing gilts, until the Bank Rate was near 1.5%.

Sterling was little changed from its level against the U.S. dollar and the euro at 1140 GMT. British government bond prices were slightly lower. Investors continued to price in the first 15 basis-point rise in Bank Rate in about a year’s time.

Vivek Paul, UK chief investment strategist at the BlackRock Investment Institute, said the message from the BoE was that rates were likely to rise only slowly and gradually in future.

“It now expects the next policy tightening cycle to be far more gradual – and to a lower end-point – than in the past,” Paul said.

Economists taking part in a Reuters poll had expected no immediate policy changes by the BoE, despite a post-lockdown rise in inflation.

The Federal Reserve’s top policymakers are also showing signs of a split about how quickly the U.S. central bank might need to scale back its quantitative easing plan.

British inflation jumped to 2.5% in June and the BoE said in a new set of forecasts that it was on course to rise even further above its 2% target in the months ahead.

But the BoE said those levels would prove to be temporary.

It forecast that inflation in two years’ time would be just above its 2% target – a signal that it may need to tighten policy slightly more than has been priced in by markets.

The BoE also said it still expected Britain’s economy would grow by 7.25% in 2021, unchanged from its May forecast, one of the fastest expansion rates among big, rich economies, after its nearly 10% plunge last year. But it raised slightly its estimate for growth in 2022 to 6% from the previous forecast of 5.75%.($1 = 0.7183 pounds)