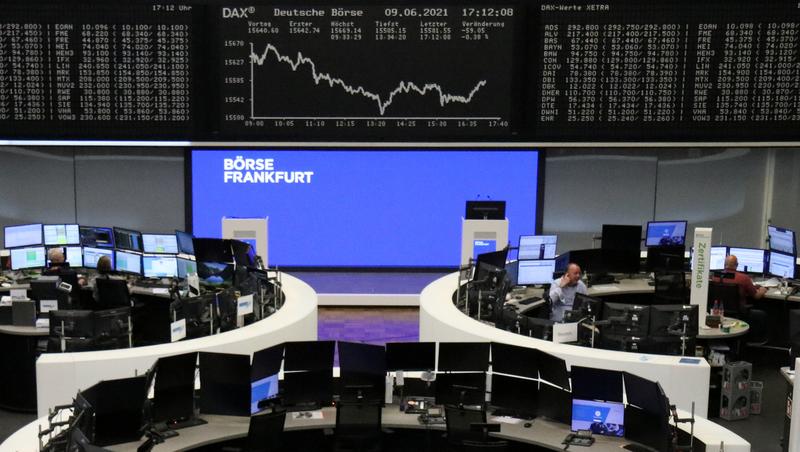 (Reuters) -European stocks slipped on Thursday as automakers and travel stocks fell after a recent run of gains, while investors counted on the European Central Bank to maintain an accommodative policy stance at a meeting later in the day.

The pan-European STOXX 600 index was down about 0.1%, but held near record levels after a four-day rally.

Automakers fell for the third straight day, while travel and leisure stocks dropped 1.1% following recent gains for the sectors on optimism about economic re-openings.

German carmaker Volkswagen fell 1.8% after a report said it expects a shortage in semiconductor supply to ease in the third quarter but sees the bottlenecks continuing in the long-term.

Euro zone stocks fell 0.2% ahead of the ECB’s policy decision and its projections for euro zone economic growth and inflation. The statement is due at 1145 GMT, followed by chief Christine Lagarde’s news conference at 1230 GMT.

The meeting comes as recent data from across the globe point to building inflationary pressures, particularly in commodities, as economies recover from long COVID-19 lockdowns.

The data has raised fears that major central banks will start to pare back their massive stimulus programmes sooner than expected, but policymakers have reaffirmed support until signs of a strong labour market recovery emerge.

“We think the ECB will not be convinced that the time is ripe to slow the pace of purchases, a view that is also supported by the recent dovish shift in ECB communication,” analysts at RBC Capital Markets wrote in a note.

Euro zone inflation last month exceeded the central bank’s target of just under 2%, a mark it has undershot for most of the last decade.

Another keenly watched reading, U.S. consumer prices data for May, will be released later in the day.

UK’s FTSE 100 got a boost from a 2.2% jump in BT Group after Altice Group said it had taken a 12.1% stake in Britain’s biggest broadband and mobile operator. [.L]

French digital music company Believe, which helps to distribute music via deals with platforms such as Spotify and Apple Music, tumbled 11.2% in its stock market debut.

10/06/2021 Markets Comments Off on Auto, travel firms weigh on European shares ahead of ECB meeting
Markets