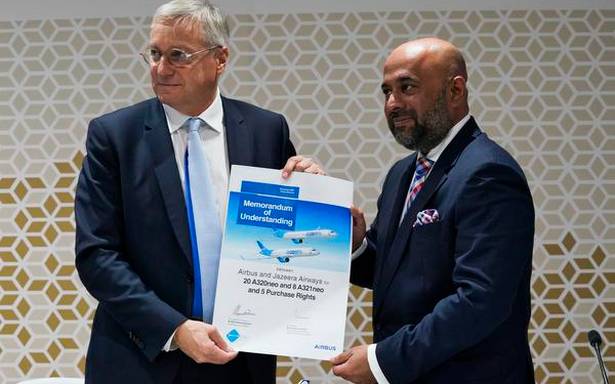 The executives said the first planes should be delivered in 2026.

Airbus won its third deal of the Dubai Air Show on Tuesday valued over $3.3 billion to sell 28 new aircraft to Kuwait’s Jazeera Airways.

The European plane maker’s agreement includes 20 single-aisle A320neos and eight A321neos, which competes directly with Boeing’s 737 Max, along with an option to sell another five new planes to the low-cost, fast-growing airline.

“Now is the right time to evolve, grow and invest in the future,” said Roohit Ramachandran, CEO of Jazeera Airways, calling it a “realistic, modest” order. The executives said the first planes should be delivered in 2026.

The show in Dubai sees a stream of order and product announcements. On the first two days, Airbus also made blockbuster sales. Airbus clinched a major deal on Monday valued into the billions of dollars to sell 111 new aircraft to the Air Lease Corporation.

Airbus boosted its order book on the opening day of the show with the sale of 255 new aircraft to Indigo Partners’ various low cost carriers – a deal valued at some $30 billion, based on the pre-pandemic price list.

The Dubai trade show typically pits France-based Airbus and its American rival Boeing, the two manufacturers at the top of the supply chain, against each other in the crucial Mideast market filled with long-haul carriers connecting East and West. Boeing has yet to make a major order announcement at the five-day show in the United Arab Emirates’ commercial hub.