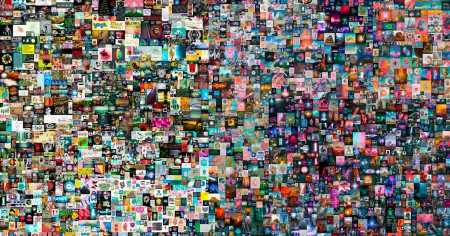 Sales of digital nonfungible tokens soared to more than $2 billion in the first quarter – more than 20 times the volume of the previous quarter, according to a report from NonFungible.com.

There were $93 million in transactions in the fourth quarter of 2020, according to the website, which tracks NFT transactions and marketplaces.

Its first-quarter total does not include sales of NBA Top Shots – the video highlights that are being turned into NFTs and traded. Those trade on the Flow platform and racked up sales of $472 million in the first quarter, according to NonFungible.com. It also does not include the $69 million NFT sold by Beeple at Christie’s in March, since it was traded through a partnership with Nifty Gateway.

Despite recent data showing a big drop in average prices from February, sales of NFTs at the start of the year showed an explosion of interest and buying. NonFungible.com said there were more than twice as many buyers than sellers in the first quarter, with 73,000 buyers for 33,000 sellers. The imbalance, according to the company, “is a signal of massive interest in newcomers, but also of the desire of current owners to keep their assets, which creates a phenomenon of scarcity in the market.”

There were nearly 150,000 active wallets in the first quarter – more than 1.5 times the number from a year ago.

NonFungible.com said the industry is largely dominated by the art and collectibles segments, and specifically projects such as CryptoPunks and SuperRare.

Despite the recent price drops from the February highs, NonFungible.com said the average price of NFTs “increased significantly” during the quarter, with a work of art on SuperRare selling for an average of $1,231 in the fourth quarter, and $6,585 in the first quarter on the secondary market.