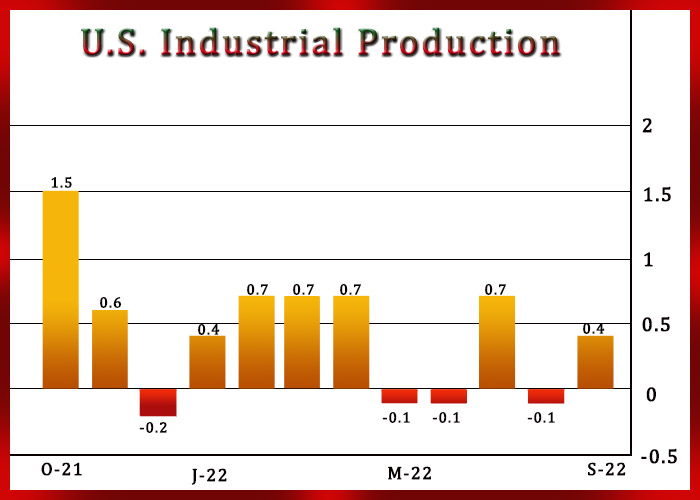 Industrial production in the U.S. increased by more than expected in the month of September, according to a report released by the Federal Reserve on Tuesday.

The Fed said industrial production rose by 0.4 percent in September after edging down by a revised 0.1 percent in August.

Economists had expected industrial production to inch up by 0.1 percent compared to the 0.2 percent dip originally reported for the previous month.

The stronger than expected growth came as manufacturing climbed by 0.4 percent in September, matching the increase seen in August.

“The 0.4% m/m gain in manufacturing output in September, together with some modest upward revisions to previous months, suggests that the factory sector is just about holding up despite the deterioration in the global manufacturing outlook – particularly in China and Europe,” said Paul Ashworth, Chief North America Economist at Capital Economics.

“That supports our estimate that third-quarter GDP growth was an above-consensus 3.3% annualized,” he added. “But we doubt that U.S. manufacturing can defy gravity for much longer, with the latest survey evidence consistent with outright declines in output soon.”

Mining output also advanced by 0.6 percent in September after coming in unchanged in August, while utilities output slipped by 0.3 percent after plunging by 3.3 percent in the previous month.

The report also showed capacity utilization in the industrial sector crept up to 80.3 percent in September from an upwardly revised 80.1 percent in August.

Economists had expected capacity utilization to come in unchanged at the 80.0 percent originally reported for the previous month.

“We look for the industrial sector to suffer a downturn as the economy experiences a mild recession in the first half of 2023,” he added. “Weakening demand, soaring interest rates, and supply chain difficulties will pose significant challenges for industrial activity in the months ahead.”