Much has been written about the alleged unfairness of Labor’s proposal to end the refund of excess franking credits.

I don’t propose to add to the debate on its merits, but instead to help self-funded retirees think more clearly about how they could work with the change – if it happens. 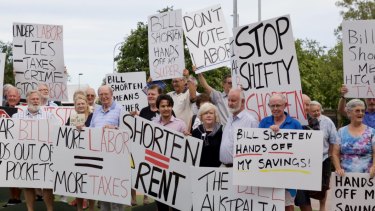 Retirees have been protesting around the country about Labor’s proposal to end the refund of excess franking credits.Credit:Paul Harris

Let’s consider Bob and Jenny, who are homeowners and are both 75.

They have $800,000 in shares in super and $60,000 in cash and other personal assets, just nudging them above the age pension assets test cut-off.

They spend $45,000 a year in dividends and franking credit refunds from their shares.

If the Labor proposal were implemented, Bob and Jenny would miss out on about $13,000 a year in franking credit refunds.

So far, this sounds bad, but let’s look at it another way.

To get themselves back on track, they need to start thinking of their shares as a source of retirement spending, rather than just a source of dividends.

Self Managed Super Fund actuarial specialists, Accurium, have an online tool that calculates how much of their super retirees can, on average, spend each year.

To achieve this, they would need to spend their dividends as they do now, but also sell a small portion of their shares each year to reach their desired level of spending.

If they were happy to stay at their current spending rate of $45,000 a year, perhaps increasing each year with inflation, there is almost no chance they would run out of money.

As they are just above the age pension assets test cut-off ($853,000), they could quickly access some age pension if their spending eroded their capital.

They are actually in a much better position than they might think, and far better off than a couple on the full age pension with no shares.

The core problem is that many people like Bob and Jenny believe that retirement income consists only of distributions, such as dividends, interest income and the like; and you don’t consume any part of your capital.

In fact, super is made up of wages that were saved up while working, ready to be spent in retirement.

You worked for those wages, so you should spend them in retirement.

The conclusion for retirees like Bob and Jenny who have significant savings invested in shares is that they can safely replace the loss of franking credit refunds by spending a little bit of their capital safely each year.

They needn’t worry anywhere near as much as many commentators are suggesting they should.