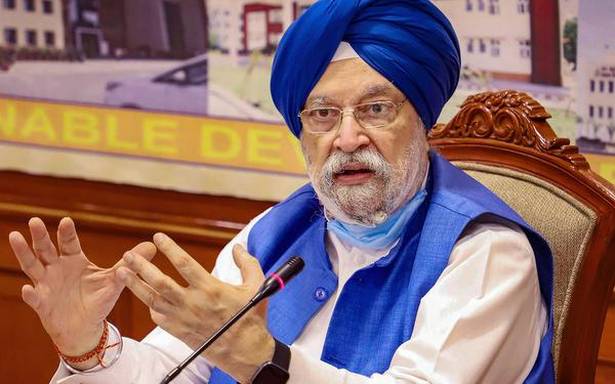 The world’s third-largest importer has many times called on OPEC to price oil at reasonable levels.

As fuel prices climbed to a record high, India’s new Petroleum Minister Hardeep Singh Puri has started dialling oil-producing nations to impress upon them for a need to make prices affordable for consumers.

"Conveyed my desire to work closely with UAE and other friendly countries to bring a sense of calm, predictability and realism among other suppliers in the energy market to make it more affordable for consumers," Mr. Puri tweeted.

The rebound in international oil prices from lows hit in May on the back of demand recovery has sent petrol and diesel rates to a record high in India.

Petrol has crossed the ₹100-a-litre mark in more than one and a half dozen states and union territories, while diesel is being sold at over ₹ 100 a litre in Rajasthan and Odisha.

India, which imports 85 % of its oil needs, has long pressed producers’ cartel OPEC and its allies, called OPEC+, to phase out its production cuts and allow oil prices to come to reasonable levels.

The world’s third-largest importer has many times called on OPEC to price oil at reasonable levels that support growth and stop propping up prices with its output cuts.

The UAE is a member of OPEC but has had a falling out with the grouping over production quotas at the meeting of the alliance earlier this month.

"We agreed to take the bilateral energy engagement to greater heights and also to diversify into new areas in the context of the fast-evolving global energy transition," Mr. Puri said in the talks with his UAE counterpart.

OPEC, Russia and several other allies in a production accord could not reach an agreement earlier this month on output quotas for August and possibly beyond. Expectations were that the alliance may agree to raise production by 500,000 to 700,000 barrels per day but the decision was postponed as the UAE differed on the baseline for such output increase.

Mr. Puri, who took over the reins of the petroleum ministry on July 8, on last Saturday called Qatar’s Minister of State for Energy Affairs Saad Sherida Al Kaabi to discuss further ways of strengthening mutual cooperation in the hydrocarbon sector.

"Discussed ways of further strengthening mutual cooperation between our two countries in the hydrocarbon sector during a warm courtesy call with Qatar’s Minister of State for Energy Affairs who is also the President & CEO of @qatarpetroleum HE Saad Sherida Al-Kaabi," Mr. Puri had tweeted on July 10.

Mr. Puri, a former diplomat, is widely expected to smoothen flared tensions with oil-producing nations in general and Saudi Arabia in particular.

The Saudi Arabia minister responded to Mr. Pradhan’s repeated pleas for a reasonable price, by saying India should tap into its reserves of crude that it bought cheaply in 2020 during the market crash.

Since then, the petroleum ministry has asked refiners to look at sources outside of the Middle East for buying oil.

India is the world’s third-largest consumer of crude and OPEC nations such as Saudi Arabia have traditionally been its principal oil source. But OPEC and OPEC+ ignoring its call for easing of supply curbs, had led India to tap newer sources to diversify its crude oil imports.

As a result, OPEC’s share in India’s oil imports has dropped to about 60 per cent in May from 74 % in the previous month.

The two sides have somewhat patched up relations, with Saudi Arabia and the UAE supplying critical medicine, oxygen and equipment to help India battle its second wave of coronavirus infections.