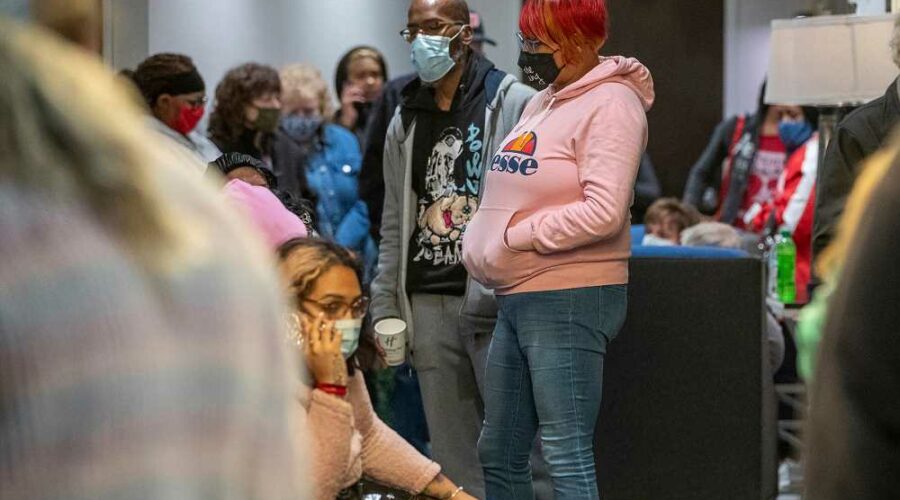 Eight killed in shooting carnage at FedEx facility in Indiana

You gotta be shippin’ me! Why a timely Christmas delivery is not looking good

FedEx is reportedly examining a policy barring workers from carrying their cellphones on the job after a deadly mass shooting at one of the company’s Indianapolis facilities.

The shipping giant told Insider it was reevaluating the ban amid concerns that the policy made it harder for workers at the warehouse to contact their families after a gunman killed eight people there Thursday night.

The staffers’ family members were told to wait for information at a nearby Holiday Inn hotel, where some said they were struggling to reach their loved ones because of the policy, according to local media.

Some workers weren’t immediately able to contact their families when they left the warehouse to be interviewed or to meet their families at the hotel, according to Indianapolis police official Craig McCartt.

“It’s certainly been a night of frustration and uncertainty for those families,” McCartt, the Indianapolis Metropolitan Police Department’s deputy chief of criminal investigations, told CNN early Friday. “I think that frustration was exacerbated by the fact that many of the employees did not have cellphones on them in the facility.”

At least one worker was reportedly able to text her husband updates as the shooting unfolded.

“I communicated with her for a while and then it went silent for a while, so I came here just to see what was going on,” the husband, Ian Johnston, told local journalist Courtney Crown near the scene of the shooting. “When I got here she texts me and she says, ‘I’m OK.’”

FedEx did not immediately respond to The Post’s request for comment about the policy being examined in the wake of the shooting that also sent four people to hospitals with gunshot wounds, according to the Indianapolis Star.

In a statement released Friday, the Tennessee-based company said it was “deeply shocked and saddened” by the deaths of its warehouse employees.

“Our most heartfelt sympathies are with all those affected by this senseless act of violence,” FedEx said. “The safety of our team members is our top priority, and we are fully cooperating with investigating authorities.”