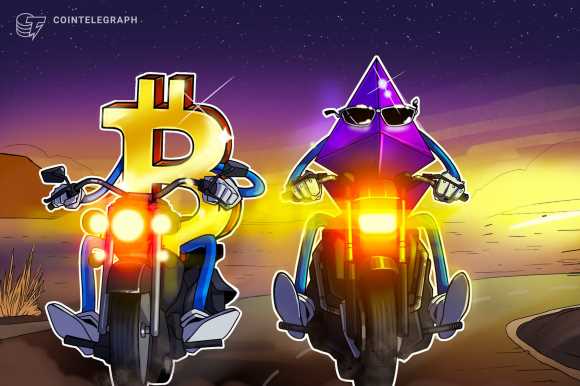 While Ethereum (ETH) being down almost 40% against Bitcoin (BTC) may give ETH traders some worries, crypto community members on Twitter shared their takes on the possibility of the smart contract platform eventually surpassing the king of crypto assets.

On Twitter, the Cointelegraph social team asked the crypto community to share their thoughts on whether Ethereum can eventually surpass Bitcoin. From predicting that it would happen in 2030 to a firm no, members of the community offered a variety of answers.

According to Jesus Crypto, there’s a possibility of ETH overtaking BTC in 2030. While the Twitter user thinks that it will be very difficult, the upcoming shift to proof-of-stake (PoS) may play a part in having ETH take the throne ten years from now.

Calling Bitcoin a dinosaur, Twitter user WakeNBakeTrades also believes that Ethereum can surpass the top crypto with the help of Polygon’s (MATIC) scaling. They tweeted that:

On the other hand, Rahul Singh argued that it will never happen, pointing out that BTC is digital gold while ETH is the second iteration of the internet. Singh noted that there are many differences between the value of digital assets and digital software. Twitter user CyberKingK agreed with the sentiment and tweeted:

Bob Shiby also weighed in on the topic saying that “there’s plenty of room for both.” The Twitter user noted that they would hold out on deciding and wait for further developments in Bitcoin while recognizing that there are a lot of tokens relying on Ethereum’s uptime.

On Monday1, a decentralized finance (DeFi) researcher said that the change to PoS consensus through the coming Merge will create an economic structure that would allow ETH to overtake BTC. The researcher noted that with the shift, ETH inflation will go down, security will go up and the asset would cement itself as a digital bond.

14/07/2022 Crypto Comments Off on Will Ethereum ever surpass Bitcoin? Crypto community answers
Markets