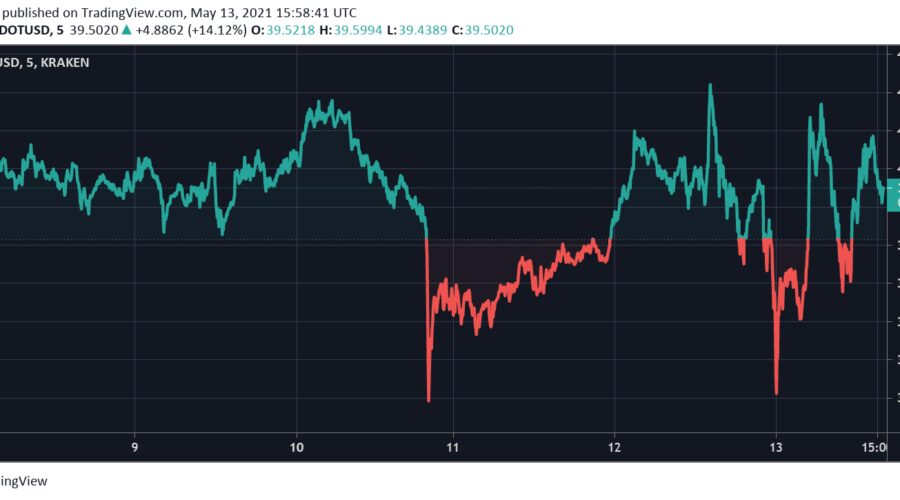 Altcoins have taken this year by storm with many of them putting up unbelievable performances to date. One of such coins is DOT which has been nothing but amazing since the start of the year. The cryptocurrency made its trading debut in August 2020 and has since gained over 1,200% in value, securing the 8th position on the crypto ladder along the way.

DOT currently has a market cap of $36 billion and was trading at $39.48 at press time and has seen a 39% rise in the last 14 days. DOT touched an all-time high of $48.36 before retracting as bears pushed their way through below the 200-day SMA. DOT’s bullish momentum is likely to continue should buyers hold its price above the 200-day SMA ($38.07) and could see its price smash the immediate resistance level which stands at $40.05 (61.85% Fibonacci level). If bulls manage to push its price to the next target (78.6% Fibonacci level), its upward trajectory will continue as the digital coin can touch the $48.36 mark while staring at the $54 price point.

DOT’s rise this year has partly been attributed to the “alt season” as relatively smaller coins have pulled many bull rallies and have outperformed Bitcoin. The digital asset is however equipped with many unique features and has also seen many developments from its camp which has pushed its price up.

Its parent project, Polkadot, has been dubbed the “blockchain of blockchains” and has made the term “interoperability” a sought-after feature in the crypto space. Polkadot aims to bring blockchains together by making any type of data accessible from any type of blockchain. The blockchain project can also upgrade protocols without a fork and is equipped with efficient tools to fix bugs and make improvements across several parts of the Polkadot ecosystem without dividing the community.

Chief Executive officer and founder of Osprey Funds, Greg King, recently unveiled the Osprey Polkadot Trust, a fund based on the Polkadot coin for private placement as interest in DOT keeps rising.

Polkadot’s compatibility and growing support for services including decentralized finance (DeFi) coupled with its tools designed to smoothly aid app migration have made it a serious competitor to Ethereum, dimming its supremacy in the dApp space. Polkadot has also captured the attention and interest of many fund managers and with the price of DOT already in bullish momentum, the digital coin is poised to test further heights this year.