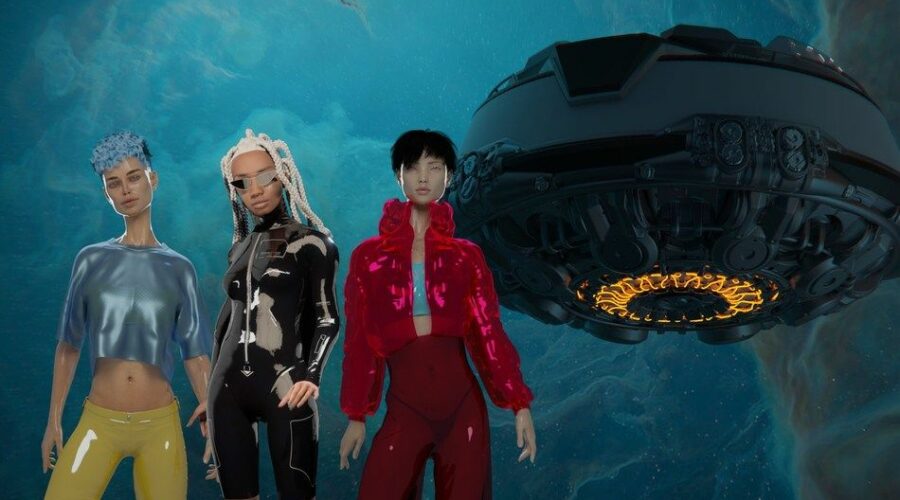 SENSO is the in-platform currency of Sensorium Galaxy, a large digital metaverse where everything is possible: music, dance, meditation, art shows, AI dating, and even digital immortality. In the past couple of months, the project released a whole series of key updates and news that attracted a lot of attention to SENSO.

The digital metaverse of Sensorium Galaxy is almost ready for takeoff. At the end of this year, its first virtual world, PRISM, will host pilot concerts by chart-topping electronic music artists, including David Guetta. The next world to launch will be the MOTION, an impressive underwater space where users will be able to dance and attend participated in mindfulness sessions and other activities centered on personal development.

The official token of the metaverse is called SENSO, and lately the crypto media has been writing about it quite a lot. The project issued one important update after another: from the announcement that the metaverse will use NFTs to partnerships with famous music artists and even the largest-ever token burn. In this article, we’ll cover six events that generated buzz around SENSO in April and May 2021. 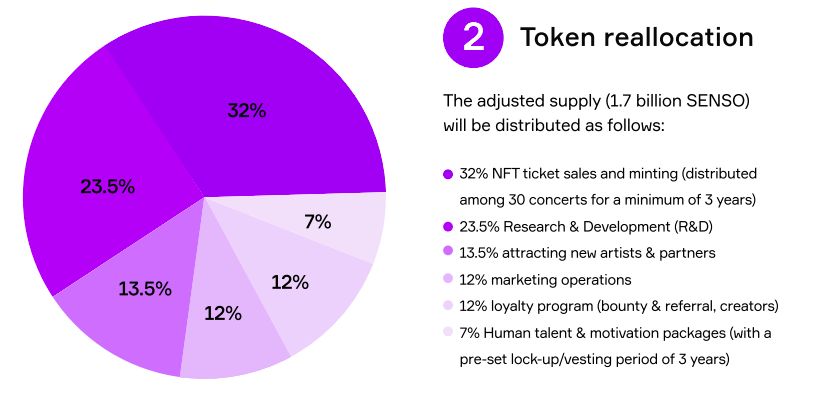 Almost every respectable blockchain project has a Light Paper, a clear and engaging document describing the platform’s functionality, goals, and advantages. A Light Paper is much shorter than a White Paper and often features charts and illustrations.

The revised SENSO Light Paper and Sensorium Galaxy was published at the end of April. The document outlines a number of new important use cases for SENSO (such as paying for NFT minting and participation in voting), describes how the DAO will work, talks about the concept of digital immortality through AI avatars and about the upcoming migration to a new blockchain, and much more. The Light Paper represents an ambitious vision that makes SENSO even more attractive both to VR and music fans and to blockchain enthusiasts.

Blockchain projects usually use token burns as a tool to slow down inflation. The best-known example is Binance Coin (BNB), batches of which are regularly burned, reducing the supply and encouraging price growth.

The situation with SENSO is far more unusual. The initial emission amounted to 5.9 billion SENSO, the bulk of which was supposed to be sold during the public round, which was expected to run for several months.

However, the available resources more than covered the project’s requirements, so it made no sense to sell additional hundreds of millions of tokens to the wide public. On the other hand, storing the excess of SENSO in reserve was not sensible, either.

Finally the organizers decided to burn 70% of all issued SENSO. This was done on April 30 by sending 4.2 billion tokens to a special smart contract address that cannot be accessed by anyone, including the developers themselves. Thus, any user who has the contract address can verify that the SENSO are indeed there, but nobody can ever withdraw them.

Since the price of SENSO exceeded $2 by the day of the burn, the total value of the burned tokens reached $10 billion. This made the SENSO burn the largest in the history of crypto.

The Light Paper also features an updated (i.e. post-burn) SENSO distribution model. The largest batch of tokens (32% of the total) is allocated towards various NFT-related fees. These include minting NFTs, listing them on the internal marketplace, and selling them to other users, as well as the minting of NFT tickets to VR concerts.

The second largest distribution item is product development (23.5% of all SENSO), followed by new partnerships and attracting artists to the platform.

3) SENSO is migrating from Ethereum to Substrate and Polkadot

Parity Substrate’s modular architecture is one of the most promising recent innovations in the blockchain space. It allows developers to create custom blockchains that can interact with one another. Moreover, thanks to a system of bridges assets can be transferred between Substrate-based chains and external blockchains like Ethereum or Binance Smart Chain.

The largest ecosystem so far built on Substrate is Polkadot, a multichain network that is sometimes called ‘the internet of blockchains’. It’s a global decentralized network where users are not limited to using the tools provided by a specific chain.

The announced migration to Substrate is a crucial step in the evolution of SENSO. In its present form, the ERC-20 SENSO token has already gained a lot of popularity, but the creators need a faster and cheaper network than Ethereum to implement their far-reaching plans. A blockchain built on Parity Substrate will ensure extra-fast transactions that cost just a few cents and – even more importantly – will make SENSO and Sensorium Galaxy part of the bigger Polkadot ecosystem.

The future role of SENSO in the Polkadot network

The new SENSO blockchain will be optimized for the needs of the entertainment industry. Apart from Sensorium Galaxy itself, it can be used by many other projects: games, social networks, VR and NFT platforms, dating apps, and so forth. This way, an entertainment ecosystem centered on SENSO can develop within the larger Polkadot framework.

4) The role of SENSO in NFT implementation

For the past few months, rumors about a possible introduction of NFTs have been spreading within the SENSO community – and the Light Paper finally confirmed it. NFTs, or non-fungible tokens, are the hottest thing in blockchain right now, but this is not the reason why Sensorium Galaxy will implement them – rather, NFTs fit perfectly in the larger SENSO ecosystem.

An NFT is a blockchain asset that authenticates and represents a unique object. The owner of an NFT acquires certain rights to the underlying asset, such as the right to copy, display, and even use it for limited commercial purposes. NFTs allow users to buy and sell unique digital objects with tokens (such as SENSO) and track every sale on the blockchain.

In Sensorium Galaxy, NFTs will be minted for the following types of objects:

●     digital identity: these are avatars that have been customized by users and have learned to imitate their behavior, becoming their ‘digital selves’. An NFT allows the owner to register their rights to the avatar as a reflection of their individuality;

The platform will have a dedicated marketplace for trading NFTs. All the fees for minting NFTs, listing them on the marketplace, and selling them will be payable in SENSO . It’s even possible that NFT transactions will become the main use case for SENSO.

A digital metaverse, like a computer game, should have NPCs (non-playing characters), or characters governed by the computer. Depending on the complexity of the algorithm, an NPC’s behavior can vary from a set of pre-programmed phrases and actions (a bit like Siri) to realistic and adaptive.

Sensorium Galaxy goes further than other VR projects, creating AI avatars that behave just like real users. The neural network that powers them constantly learns new phrases and dialogue patterns, so that the NPC’s actions and manners become more realistic with time without the need for additional programming. An example of a dialogue with an AI avatar can be heard in the teaser for the Sensorium Galaxy mobile app.

Users will be able to choose between two modes of interacting with AI characters: a general friendly style and flirting (so-called AI dating). Mobile users will be able to use the chat feature, while owners of VR sets will get an opportunity to arrange a real date with an NPC in the lounge space of the Sensorium Starship. According to the authors of the Light Paper, your next partners may not even be from this galaxy!

Thanks to the limitless customization opportunities, you’ll be able to shape an avatar that reflects your personality. However, full customization isn’t the limit: in Sensorium Galaxy, avatars can learn and evolve.

Whenever you log into the digital metaverse to chat, dance, or attend a virtual event, the digital twin will learn more about your communication style and preferences. After a while, it will gain the ability to act on its own in the virtual space, even when you are offline.

As digital beings, avatars don’t age or get sick: this lets the developers talk about digital immortality. In the digital metaverse, your virtual self will have an opportunity to live forever.

6) The DAO of SENSO holders

As explained in the Light Paper, the DAO members will be able to submit proposals and vote on the following matters:

●     adding new avatars to the metaverse;

●     listing assets on the marketplace, etc.

It’s worth noting that the Substrate-based blockchain can help make the voting process fast and virtually costless. The key issue for Ethereum-based DAOs is the high gas fees, which make voting impractical for many token holders. By contrast, the cost of voting won’t be an issue in Sensorium Galaxy, making the system far more democratic.

The next important step after the SENSO token burn and the publication of the Light Paper should be the release of the revised White Paper. The document will provide a more detailed description of the upcoming blockchain on Substrate, NFTs, and AI features. All the details about the White Paper and other updates can be found in the official SENSO blog.

17/08/2021 Crypto Comments Off on SENSO takes central stage: 6 reasons why this token can prove important to VR industry
Markets