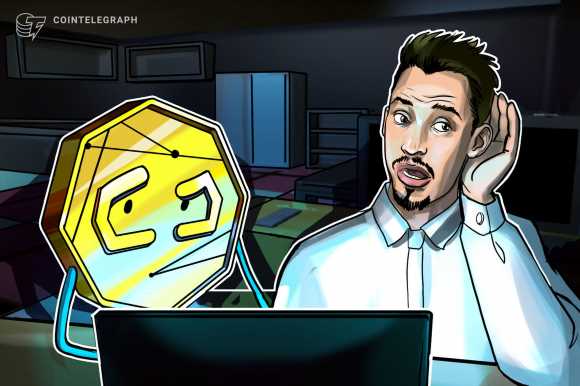 Sam Bankman-Fried, the founder and former CEO of the now-bankrupt cryptocurrency exchange FTX, created a strange Twitter thread starting on Nov. 14, attracting the attention and speculation of the crypto community.

The latest tweet at the time of writing, posted by Bankman-Fried at 5:30 am UTC on Nov. 15, is Bankman-Fried saying, “this is all as I remember it, but my memory might be faulty in parts.”

The other tweets spell out “What HAPPENED” and were posted across multiple hours. 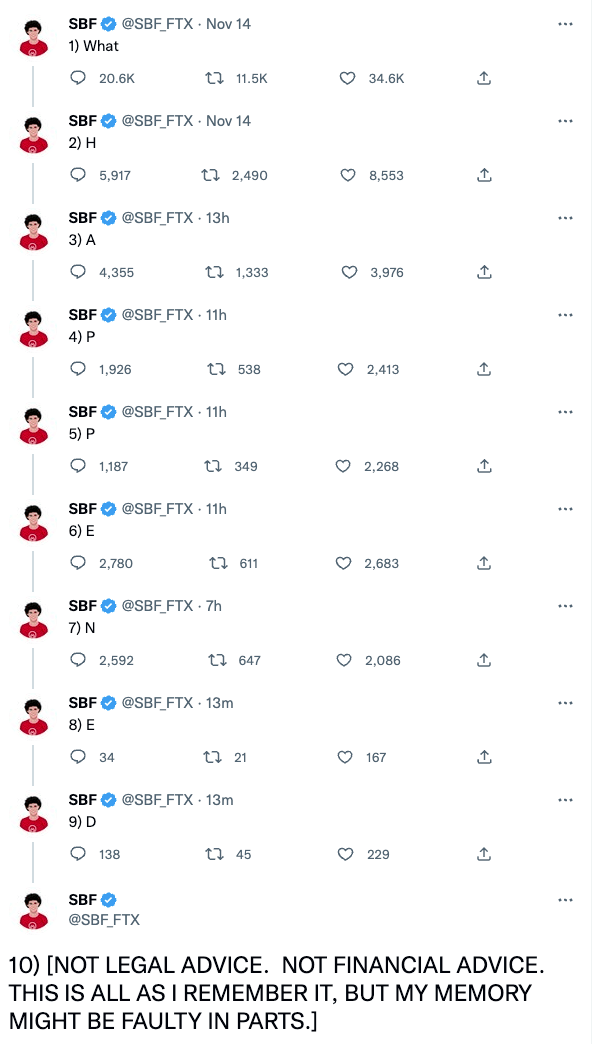 Asked about his cryptic tweets in a Nov. 14 interview with the New York Times. Bankman-Fried said, “I’m making it up as I go” and the series of tweets is “going to be more than one word.”

When asked why he said “I don’t know,” and added “I’m improvising. I think it’s time,” seemingly refusing to explain further.

Twitter users instantly took to speculation on the meaning of the tweets, with crypto YouTuber Stephen Findeisen saying he was “on the amphetamines again,” possibly in reference to Bankman-Fried discussing experimenting with the amphetamine Adderall on an Oct. 2020 podcast.

Early in the bizarre Twitter thread, others joked that Bankman-Fried’s lawyer physically intervened to stop him from publishing anything potentially damning if legal action is brought forward.

Journalist and author Alex Berenson said the tweets could be an act by Bankman-Fried to possibly defend his actions by claiming insanity or that he was under mental duress if he’s brought before a court.

A seemingly debunked theory was that Bankman-Fried allegedly used the new tweets to cover up the deletion of his older “incriminating” ones in a sleight-of-hand attempt to dupe tweet-tracking bots that use his account’s total tweet count to catch deleted tweets.

Bankman-Fried has deleted potentially damning tweets in the past, most notably the flurry posted on Nov. 7 claiming FTX and its assets were “fine.”

Related: Let’s move on from FTX’s collapse and get back to the basics

Crypto insights platform The TIE shared a document on Nov. 15 purporting to show that Bankman-Fried had deleted at least 118 tweets over the past year, although adding that more may have been missed due to tweets being recorded by their software every 15 minutes.

Independent crypto security researcher Officer’s Notes speculated that the FTX founder was trying his hand at steganography — a way of presenting information within another message i.e., a hidden code.

Chandhoke said Bankman-Fried possibly attempting to spell “what happened” is allegedly sending a message to Trabucco, pointing to a series of older tweets of Trabucco that say “what happened?” as evidence.

Still, others think Bankman-Fried is click-farming and just wants to see engagement on his posts. Data from the social media analytics platform Social Blade shows Bankman-Fried’s Twitter follower count increasing by over 202,000 between Nov. 7 to 13, around the time FTX’s saga began to unfold.