Ethereum has never been shorted more than right now, not even at the peak in September when China banned crypto-exchanges.

That stands at 10,000 more than when China banned crypto-exchanges in September, sending eth shorts to 178,000. Shortly after they then fell to 100,000 as the market turned. 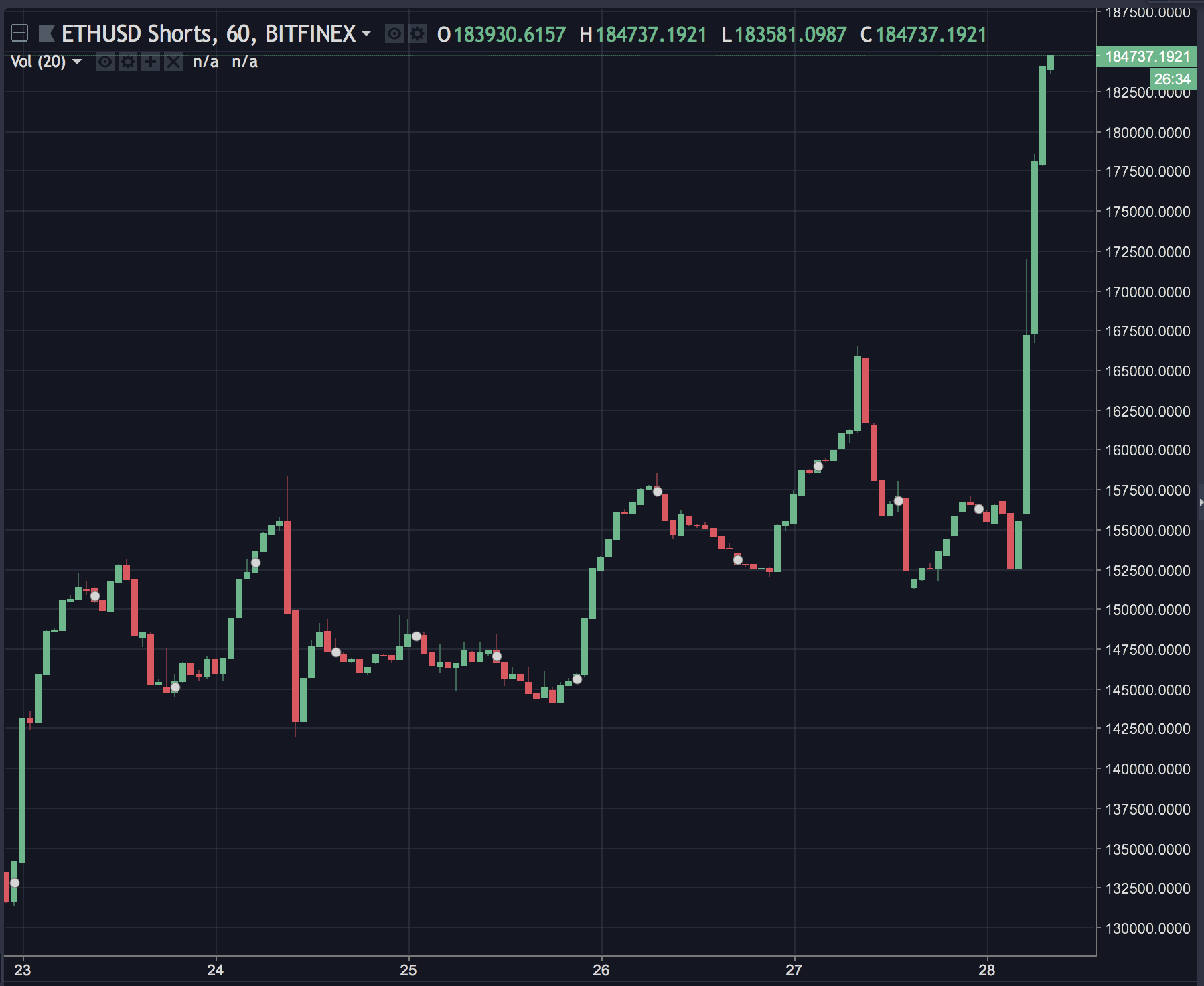 What exactly is going on here is unclear, but there are three possibilities. First, starting with the unlikely one. 5-6AM London time is around midnight in America and afternoon in China/Asia. It is usually when prices move.

It may well be some SEC meeting somewhere down the night streets might have reached some decision to declare ethereum a security later today.

We find that very unlikely because CFTC has sort of implicitly already claimed jurisdiction over eth by investigating price manipulation in ethereum.

As such, if anything, that night meeting, if there was any, may well have some very good news. We should find out later today once America wakes up whether this wild speculation has any bearing.

We can’t discount that something might have happened in Asia, in which case we should find out about that soon too.

What we do know now however is that EOS has spent 300,000 eth. As we reported earlier, there were some wild price moves on Bitfinex, including huge walls and even what looks like market sells with trading volumes of 180,000 between 5 and 6 AM.

EOS is preparing for their mainnet launch this Friday, with the year long ICO to end around then too. The master of hype and then fading away Dan Larimer may well be cooking something.

That too is partly speculation, partly fact as a smoking gun to show they are selling on Bitfinex this 300,000 is currently missing, but there is plenty of circumstantial evidence.

EOS currently has 1.1 million more eth, with their ICO still on-going which may give them another 100,000 in the next 3-4 days.

What they will do with that amount is unknown at this stage. Opening shorts and then market selling would perhaps be far too obvious and thus far too stupid.

Bitfinex should know, but they are campaigning to be miner/staker on EOS, called a Block producer, so any denial from them wouldn’t hold much weight.

You would expect EOS to clearly state their holdings, their finances and their spending plans, but they might be too busy right now preparing for the mainnet launch.

The rest of the market is down too, including EOS, but eth is down significantly more. Suggesting the price move has something to do with eth, rather than traders being traders.

What that something is, remains unknown at this stage, but if something doesn’t come from SEC or Asia, then there’s only one reasonable conclusion left.