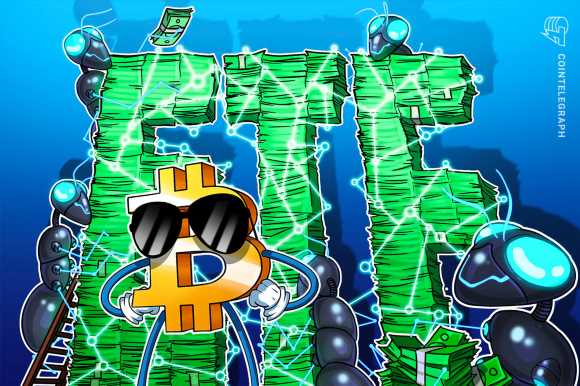 The first short Bitcoin ETF from ProShares got off to a very slow start on its June 21 launch but gathered pace by increasing trading volume 380% on day two.

On launch day June 21, the ProShares Bitcoin Short Strategy Exchange-Traded Fund (BITI) traded a lackluster 183,300 shares which ETF analyst at Bloomberg Eric Balchunas noted in a tweet was “less than 1% of the volume $BITO had at this time on Day One.”

However the next day’s trading volume jumped nearly four times to 886,200 shares worth about $36.2 million according to Yahoo Finance.

The BITI exchange traded fund (ETF) allows investors to take short positions on the Bitcoin market without holding BTC themselves. Shorting means speculating that the value of a market or asset will fall.

ProShares CEO Michael L. Sapir talked up the volume on day two as indicative of demand and the low fee structure of BITI.

“The reception that BITI is getting in the market affirms investor demand for a convenient and cost-effective ETF to potentially profit or hedge their cryptocurrency holdings when bitcoin drops in value.”

ProShares also provides the Bitcoin Strategy ETF (BITO), which launched on October 18. BITO saw about $1 billion in volume on its first day of trading.

By November, BITO’s volume was among the top 2% of all ETFs, but has now lost 50.93% of its value since inception

Of course $36M pales in comparison to the $1B long positions on day one. This may mean most investors are uncertain if there is further downside from here. Over the past 30 days, the largest crypto by market cap has lost over 30% of its value.

BITI’s relatively poor performance on launch day drew jeers from CFA at Bloomberg Intelligence James Seyffart. On June 21, Seyffart tweeted that within the first hour of trading, BITI had only done about $1 million in volume.

Seyffart said that he expected opening volume to be low, but “Yea def not saying it’s a surprise. Though I must admit I’m a tad surprised it’s THIS low.”

Australia’s new Bitcoin ETFs have also struggled to attract interest. In April, the Cosmos Purpose Bitcoin Access ETF (CBTC) was expected to attract $1 billion in inflows. However, it and the ETFS 21Shares Bitcoin ETF (EBTC) launch days were delayed until May 12. To date CBTC only has $810,000 assets under management while EBTC has $2.8 million.

American traders still yearn for a spot Bitcoin ETF which the Securities and Exchange Commission have denied for years. Commissioner Hester Pierce believes a Bitcoin spot ETF can be launched in the US when industry insiders and regulators cooperate closer to ensure that both are on the same page.