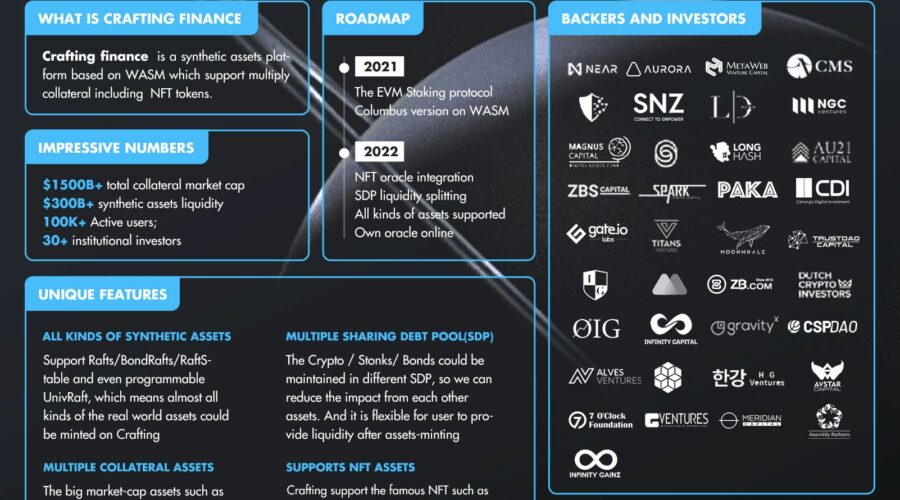 The synthetic asset issuance and trading platform Crafting Finance, developed based on NEAR ecology and the WASM virtual machine, will complete its mainnet launch in late January. Since NEAR Protocol is focused on creating a developer and user friendly platform, Crating Finance like the name of its first version — Columbus, is considered as the pioneer to empower the financial application in the NEAR ecosystem.

The core objective of Crafting Finance’s first version is working with synthetic assets, which are an intelligent invention for dealing with distributed transactions of different types of assets including stocks, debts and derivatives. They are widely used in traditional financial markets in significantly large volumes. Synthetic assets are also a financial instrument composed of one or more asset derivatives. Given that asset categories supported by mainstream synthetic asset projects are still quite limited, Crafting Finance is committed to “simulating” almost all of the resources found in the real world, reaching all kinds of financial assets at a low cost and enabling the realization of any type of financial asset contract.

Raft and RaftStable will also be launched with this version. In Crafting Finance, synthetic assets are named “Rafts”, and they co-exist in a shared debt pool that can provide Rafts with almost unlimited liquidity, somewhat like the sea. Rafts include both RaftStable, directly anchored to fiat currencies, and Raft, anchored to individual financial assets (e.g., rBTC anchored to Bitcoin, rAAPL anchored to Apple stock, rXAU anchored to gold, etc.).

Crafting Finance has also launched Kingsman, a decentralized trading platform based on the shared debt pool through which users can conduct transactions of various types of synthetic assets that have been minted. In Kingsman, all synthetic assets can be converted into other synthetic assets, including rBTC, rETH and rNear. Synthetic assets of this type of cryptocurrency can be foreign exchange such as EUR, JPY and CNY, and even gold and various stocks, all of which are synthetic assets produced by the system, rather than physical assets. Their conversion rate is determined by the actual external price provided by the oracle. No counter-party is required, and users can convert all assets supported by the system under the premise of unlimited liquidity. The shared debt pool enables the platform to support “all-type assets”, and liquidity sharing enables the platform to achieve zero slippage transactions.

In the overall design process of Crafting Finance, Columbus is one of the four main versions, all being named after famous explorers. The version to follow, “Zhang Qian”, will mark the launch of synthetic bond assets, known as BondRaft. The next version, named after the famous Greenland explorer Thurwaldson will launch with the application UnivRaft to realize the “simulation” of any financial asset or even all types of assets that exist in the real world. The fourth version will pay tribute to the navigator Vasco da Gama, who pioneered the navigation route from Europe around the Cape of Good Hope to India. This version will launch the oracle with full functions, while marking the possibility for Crafting Finance to obtain all real-world asset data.