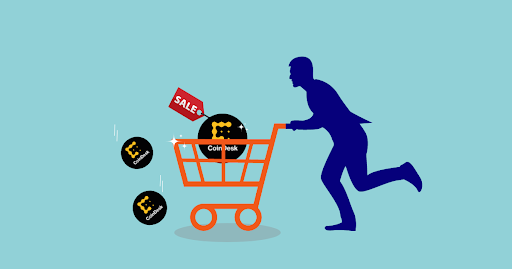 CoinDesk, a New York-based company that was first established in 2013 to track Bitcoin, has grown into a major source of news and pricing benchmarks for the entire spectrum of cryptocurrencies. The Digital Currency Group is the sole owner of the business. CoinDesk Inc. has recruited investment bank Lazard Ltd (LAZ.N) to oversee the process as it considers a whole or partial sale of the company.

After Genesis declared bankruptcy, it caused issues with the project’s Earn lending scheme, which was a collaboration with Gemini, a crypto exchange owned privately by the Winklevoss twins.

How much is CoinDesk actually worth?

Eleanor Terrett, a journalist, and producer, recently tweeted that the investment banker working with CoinDesk on a prospective sale is reportedly all set to accept the highest bid, despite other interested purchasers stating a $200M+ price tag is considerably overvalued. Notably, DCG acquired CoinDesk in 2016 for approximately $500K.

Charles Hoskinson, the founder of Cardano, asserts that he is interested in purchasing Coindesk, the leading cryptocurrency news site. He indicated that he wants to regain his journalistic integrity. Cardano’s founder has previously complained about being handled unfairly by the media, stating that certain outlets may have an agenda to push. The crypto tycoon has proposed converting numerous news items into non-fungible tokens, allowing users to interact with them.

Hoskinson has heard that Coindesk is either seeking funding or trying to be acquired by someone after its parent firm, Barry Silbert’s Digital Currency Group, was affected by the cryptocurrency crisis. One of DCG’s businesses, the cryptocurrency brokerage Genesis, is on course to declare bankruptcy after halting user withdrawals in mid-November.

Eleanor Terrett’s tweet announcing the CoinDesk sale has received a lot of attention. According to some, the person who ultimately decides to buy CoinDesk, a media outlet, needs to be closely watched. Whoever controls the media, controls the mind. According to one user, the industry’s fear, uncertainty, and doubt would end if Ripple acquired CoinDesk.

Because media outlets play a crucial part in informing the community, the ultimate buyer could be highly essential for the crypto industry.