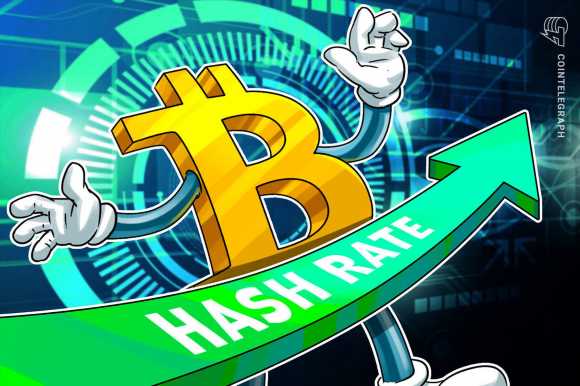 The hashrate for the Bitcoin network has made a remarkable recovery since it crashed following China’s crypto mining clampdown earlier this year.

The Bitcoin hashrate has now topped 150 Exahashes, or one quintillion hashes, per second according to data from analytics provider CryptoQuant.

On Aug. 24, the metrics provider reported a hashrate of 152 EH/s which has tripled since it bottomed out this year on June 28 at 52 EH/s.

The recovery of the BTC hashrate means that the network is much more secure and harder to attack.

The average Bitcoin hashrate — the amount of computing power in the network — hit an all-time high of 197.6 EH/s on May 13 according to Bitinfocharts. Over the six weeks or so that followed, it slumped by more than 65% as mining rigs across China were powered down for the “great miner migration”.

The metric is now approaching early June levels and, if the trend continues, could hit a new all-time high within the next couple of months.

In early May, Cointelegraph reported that there was already evidence that hashrate was moving away from China. Details on the migration are difficult to come by: Cambridge University’s well-sourced “mining map” has not been updated since April when it reported 65% of the hashrate residing in China.

Measuring hashrate data by mining pool is also inaccurate since many pools are a mix of hash power from physical facilities and miners from all around the world pooling computing resources.

Since the hashrate has now recovered, it would indicate that the miner migration is almost complete. This has resulted in an increase in difficulty, with the last rise of around 7% occurring on Aug. 13. The next one is due any time now, which will mean higher computational costs for miners as more of the formerly China-based operations come back online to compete for blocks. The current estimate is for a 12.37% difficulty increase.

While the migrating operations were offline in June and July, miners already operating in countries such as the United States were able to rake in bigger profits due to the lower difficulty.