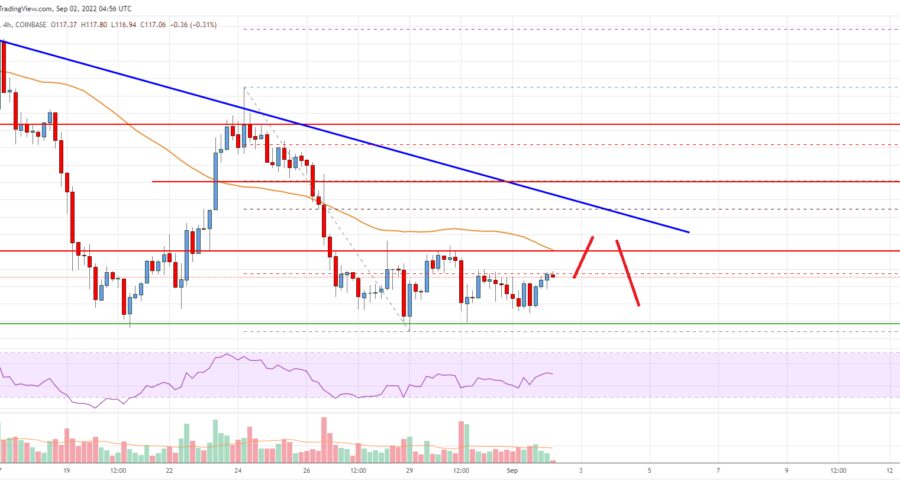 Bitcoin cash price is moving lower below $130 against the US Dollar, similar to bitcoin. BCH/USD could slide further towards the $100 level in the near term.

Bitcoin cash price struggled to gain pace for a move above the $138 and $140 resistance levels. BCH formed a high near $139 and started a fresh decline.

It is now consolidating and struggling below the $120 level. On the upside, an immediate resistance is near the $118 level. It is near the 23.6% Fib retracement level of the downward move from the $139 swing high to $111 low.

The first major resistance is near the $120 level and the 55 simple moving average (4-hours). There is also a major bearish trend line forming with resistance near $124 on the 4-hours chart of the BCH/USD pair.

If there is a move above the $130 resistance, the price could rise towards the $140 zone. An immediate support on the downside is near the $112 zone.

The next major support is near the $110 level, below which the bears might aim $105. The next target for them may perhaps be near the $100 level.

Looking at the chart, bitcoin cash price is now trading below the $130 zone and the 55 simple moving average (4-hours). Overall, the price remains at a risk of more losses below the $112 and $110 support levels.

4 hours MACD – The MACD for BCH/USD is losing pace in the bearish zone.

4 hours RSI (Relative Strength Index) – The RSI for BCH/USD is near the 50 level.