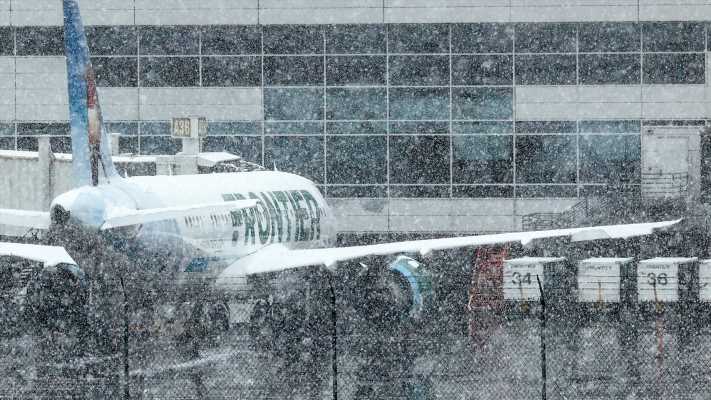 Winter and spring were on a collision course Sunday as parts of Colorado, Wyoming and Utah were being blasted with up to four feet of snow while Oklahoma, Arkansas and Missouri were among states bracing for heavy rains, high winds, flooding and possible tornadoes.

Parts of Texas were in recovery mode after the system pounded the state with tornadoes and heavy storms. In Amarillo, dozens of hikers were evacuated from a trail after two possible tornadoes in the area. Randall County Sheriff Christopher Forbis reported hail the size of baseballs.

“Power lines and a cell tower are down,” Amarillo Area Emergency Management Director Chad Orton said. “One house was damaged, but the family was in the basement … there have been no injuries or fatalities.”

In Colorado, a foot of snow had fallen in Denver early Sunday, and more was on the way. More than 2,000 flights have been canceled over the weekend at Denver International Airport.

“Total snow accumulations of 12-24 inches for the Interstate 25 corridor and up to 3-4 feet in the northern foothills,” the National Weather Service warned. “Wind gusts of 30-40 mph will cause some blowing and drifting snow.”

The Colorado Department of Transportation warned that road closures are highly likely and asked people not to make unnecessary trips. The highways most likely to be affected included Interstate 25 from Colorado Springs to Wyoming, including Denver and Monument Hill; I-70 to Limon; and I-76 to Fort Morgan, the department said.

To the south and east, AccuWeather warned that Sunday would bring more severe weather from eastern Oklahoma and Texas all the way to the Mississippi River. The main severe weather threats on Sunday are likely to be heavy, drenching downpours and damaging winds, AccuWeather said. Parts of Missouri was deluged with 7 inches of rain Saturday, and more was forecast for Sunday

The National Weather Service in Little Rock, Arkansas, warned of strong and severe storms will be possible late Sunday.

“Damaging winds will remain the primary threat, but an isolated tornado cannot be completely ruled out,” the weather service said.

Heavy, gusty storms can shift east into the Ohio and Tennessee valleys on Monday, AccuWeather said.

14/03/2021 Business Comments Off on Winter storm pounds Denver, Colorado could get 4 feet of snow; thousands of flights canceled
Markets